When millions of Americans started losing their jobs due to the coronavirus pandemic in March, the federal government introduced the Federal Pandemic Unemployment Compensation program (FPUC) as part of the CARES Act. The program, which provides jobless Americans who qualify for regular unemployment benefits with an extra $600 per week, proved highly effective in keeping affected households afloat and cushioning consumer spending. Unless Congress steps in at the last minute, the program is running out at the end of this week, though, leaving millions of Americans with the prospect of a steep drop-off in household income, sparking fears of mass credit card defaults, mortgage delinqencies and evictions.

To make things worse, Americans were shouldering a record amount of debt, even before the pandemic hit. Total household debt in the United States, including mortgages, auto loans, credit card and student debt, climbed to $14.30 trillion in the first quarter of 2020, eclipsing the previous peak at the height of the great recession in Q3 2008 by $1.62 trillion in nominal terms.

That’s according to the Federal Reserve Bank of New York’s latest Report on Household Debt and Credit, which also shows that the delinquency rate, in this case the percentage of the total household debt balance that is at least 30 days past due, is significantly lower than it was back then (4.6 percent vs. a peak of 11.9 percent at the end of 2009). This will be the number to watch in the coming months, however, as the effects of the ongoing crisis will become apparent. 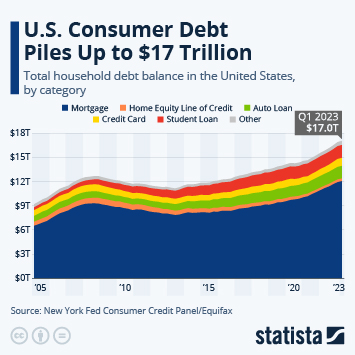 This chart shows the total household debt balance in the United States.