After having been increasingly critical of the World Health Organization as the coronavirus global health crisis continued, President Trump said in April that he would halt funding to the organization. This was then escalated on Tuesday as the Trump administration officially notified the United Nations that the U.S. will be withdrawing completely - expected to take effect from July 6, 2021.

Leading up to the decision, President Trump had attempted to shift blame for the coronavirus crisis in the U.S. to the WHO, accusing the organization "of calling it wrong", of being "China-centric" and that "they should have called it months earlier". That's despite Peter Navarro, Trump's trade adviser, warning on January 29 that the virus could be a risk for millions of Americans and cost trillions of dollars while the WHO labelled it a public health emergency the next day.

Referring to U.S. financial contributions to the organization at a press conference in April, Trump said that "we're going to put a hold on money spent to the WHO". He then stated that "we’re going to put a very powerful hold on it and we’re going to see". The president was subsequently asked if witholding money from the WHO in the middle of a pandemic was the right decision and he then seemed to backtrack, saying "no maybe not".

Given the current situation, which countries actually do contribute the most financially to the WHO? There are two kinds of payments - assessed contributions and voluntary supplementary assessed contributions. The first one is a membership fee where the total amount paid is calculated relative to wealth and population. The second is an extra voluntary financial contribution members are encouraged to make.

The Trump administration actually slashed WHO funding in its most recent budget proposal in February to an assessed contribution of $115.8 million. Despite the cut, that figure is still the highest contribution by far with China paying in the second highest sum with $57.4 million. Japan is in third place with $41.0 million. The total sum of assessed contributions due to be paid by all member states this year stood at approximately $500 million on January 1, of which approximately $170 million had been paid by March 31.

As of June 30, 2020, the United States' assessed contribution for 2020 was still listed as unpaid on the WHO website, as were additional outstanding contributions of more than $80 million occured in previous years.

Correction: A previous version of this chart only referenced the amounts payable in U.S. dollars. Per WHO resolution 66.16, where the total annual assessed contribution for a member is $200,000 or greater, that member’s contribution is assessed half in U.S. dollars and half in Swiss francs. 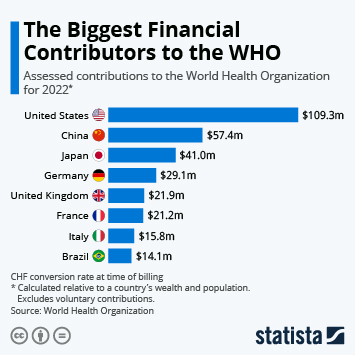 This chart shows assessed contributions to the World Health Organization for 2020 (as of March 31, 2020).