Just a couple of weeks ago, the United States had just celebrated Independence Day in almost normal fashion, it looked like the worst might be over in terms of the pandemic. The number of new cases was at a the lowest level since March 2020, and the warm summer weather combined with vaccinations looked to be a powerful safeguard against a possible resurgence of the virus.

And yet, here we are four weeks later, facing what shapes up to be a fourth wave of the pandemic, the only question being how bad it will get before it gets better this time. Over the past four weeks, the seven-day average of new infections has risen more than sixfold, with the highly contagious Delta variant making up more than 80 percent of new cases, according to the CDC.

"The Delta variant is more aggressive and much more transmissible than previously circulating strains,” Dr. Rochelle P. Walensky, director of the CDC, said at a White House briefing last week, calling it "one of the most infectious respiratory viruses" she had seen in her 20-year career. With that in mind, government officials and leading health experts keep urging unvaccinated Americans to get jabbed, as the available vaccines continue to be the best defense against the aggressive virus, regardless of (fully expected) breakthrough infections.

As the following chart shows, the level of new infections has already surpassed the first and second wave of the virus and while the EU appears to have managed to flatten out the rise in new cases for now, cases keep going up in the United States. 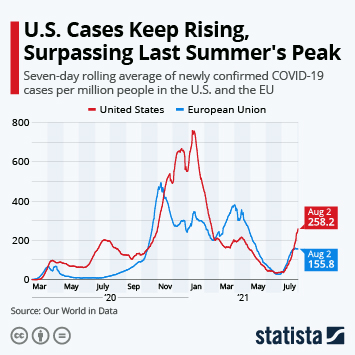 This chart shows the seven-day rolling average of newly confirmed COVID-19 cases per million people in the U.S. and the European Union.