The rush to develop a Covid-19 vaccine is heating up with the CDC telling U.S. states to be ready to destribute one by early November while Russia is already aiming to bring its Sputnik V innoculation to the market this month. Scientists have warned that candidates that have not completed trials may make the pandemic worse, however. Great hopes have been pinned on a coronavirus vaccine candidate being developed by the University of Oxford that successfully triggered a strong immune response in trials involving 1,077 people last month. Yet, Phase III trials were halted on Wednesday after a participant came down with an unexplained illness. Pharmaceutical company Astrazeneca, which partners with the University of Oxford on the development of the vaccine, called the pause a "routine" procedure.

So far, the vaccine did not show any dangerous side effects but 70 percent of participants in the trial experienced a headache or fever which scientists said could be managed by paracetamol.

Scientific journal The Lancet had published hugely promising results of Phase I/II trials in July for the University of Oxford vaccine and they have raised hopes that a safe, effective and accessible vaccine will be attainable to help end the pandemic. The trial provoked a T cell response within 14 days of vaccination and an antibody response within 28 days.

Even ahead of the tests, there have been commitments to supply over 2 billion doses of the vaccine to the United Kingdom, the United States, Europe's Inclusive Vaccines Alliance, the Coalition for Epidemic Preparedness, Gavi the Vaccine Alliance and the Serum Institute of India. Vaccines generally take years to develop but the University of Oxford have been working on their current project at an unprecedented pace. It is one of nearly 200 Covid-19 vaccine candidates listed by the World Health Organization, according to The Guardian and several are already in advanced testing.

The data shows that the bulk of candidates are in the pre-clinical stage of testing where the vaccine is given to animals to see if it triggers an immune response. 25 are in phase I trials where it is administered to a small group of people to determine whether it is safe. 15 are in phase II where the candidate is given to hundreds of people to evaluate further safety issues as well as dosage. The last stage is Phase III, of which seven candidates are currently in, and it involves thousands of people receiving the vaccine to eliminate any final safety fears, particularly considering side effects. 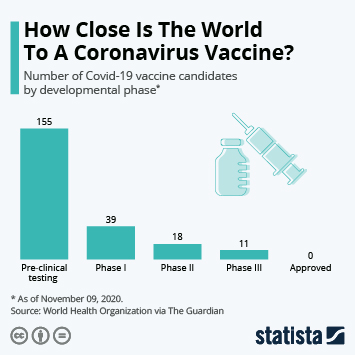 This chart shows the number of Covid-19 vaccine candidates by developmental phase.