Social e-commerce in China is already a gigantic market of $300 billion, and it is poised to grow even more in the coming years as a plethora of different services vie for top positions in the sector. Our infographic shows some of the biggest and noteworthiest ones.

Some marketing concepts in Chinese social e-commerce are similar to those employed by social media influencers in other countries (while being a bit more on the nose). Others are still virtually unheard of in North America or Europe.

When it comes to marketing products via user-generated content, Chinese social media apps have integrated the sales process. Douyin, the Chinese TikTok, might be very similar to its international counterpart since both are owned by the same parent company, ByteDance. Yet, Douyin has had its own in-app store since 2018, where users lured in by short videos can instantly purchase the products they have viewed. Buying directly in the app or hosting product descriptions that link to other e-commerce sites are both possible and certainly make tracking sales tied to influencers and content creators a lot easier. Kuaishou employs the same concept while focusing on smaller, less cosmopolitan cities, while Xiaohongshu and Mogujie focus more on pretty pictures (think Instagram with a shop) but are, of course, also teeming with influencers peddling wares.

Yet, many account holders on these user-generated content platforms might not be buyers but just viewers. In rival concept group buying on the other hand, users actually log on with the intention to find a deal together with their social network or people living in their vicinity. Monthly active users for group buying would therefore be naturally lower than for those platforms focusing on social media and e-commerce. The exception is Pingduoduo, a veteran of the group-buying concept that boasted 568 million monthly active users as of Q2 of 2020. Group-buying platforms offer prices that get increasingly discounted the more items a group purchases. These “groupon for wares” apps typically also leverage the power of WeChat, the massively popular Chinese messenger and umbrella app, to let people approach their friends and family. Apps are often third-party platforms, connecting wholesalers or even producers directly with customer groups, cutting out more than one middle man in order to deliver steep discounts.

Chinese e-commerce giant JD, an inventory seller, launched its own group-selling product, Jingxi, with some success in 2019, leveraging its own logistics infrastructure as well as allowing third-party offers. Alibaba’s Juhuasuan has not come as far yet but it is also not allowed to integrate on its rival Tencent’s WeChat app. Alibaba, which has been a third-party platform all along, used Juhuasuan and the group buying concept to break down another frontier of e-commerce: fresh produce.

While low cost, fast-moving goods still pose challenges for e-commerce around the world, Chinese group buying has made inroads into the market, albeit in smaller cities. Focusing less on social contacts but on neighbor groups, platforms enable the use of stay-at-home mums or convenience store owners as points of contact to send wares in bulk. It is then up to the neighborhood to distribute them, keeping last-mile costs to a minimum. Xing Sheng, which was started by a grocery store chain from Hunan province, is beating Alibaba at the grocery group-buying game, as is Beijing startup Shihuituan. 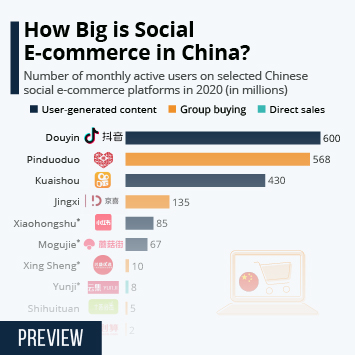 This chart shows the number of monthly active users on selected Chinese social e-commerce platforms in 2020 (in millions).