Today, the U.S. Supreme Court commences a term that might bring about new landmark decisions on the topics of guns, religious rights and abortion.

The case of the currently suspended Mississippi abortion ban, which aims to outlaw abortions after 15 weeks of gestational age of the fetus, is not expected to be heard before Dec. 1, but the issue of abortion rights has been in the spotlight for weeks as several states are embroiled in court battles over new laws.

Mississippi's abortion law currently in place is already the second-strictest in the U.S., banning abortions after 20 weeks of gestational age.

The most restrictive abortion law can currently be found in Texas, as data collected by the Kaiser Family Foundation shows. It bans abortions after 6 weeks of gestational age, which correspondents to around four weeks of pregnancy. The law is different from other bans in that it calls on citizens to enforce it. A stay on the ban is currently also considered.

Most other states in the U.S. allow abortions until 22 or 24 weeks of gestational age, while Virginia even allows them up until 26 weeks. Some states tie abortions to fetal viability, meaning that healthy pregnancies can be terminated up until 24 weeks, while those with genetic defects so severe that the baby would not survive birth might be aborted later.

In all states, later abortions can also be performed if the health and/or life of the mother is severely at risk. Seven more states have no specific laws on abortions, also enabling them to carry out late-term abortions. Despite the different laws, most pregnancies in the U.S. are terminated in the first trimester (up to 14 weeks of gestational age), which is also the time up until which most European countries allow for abortions. 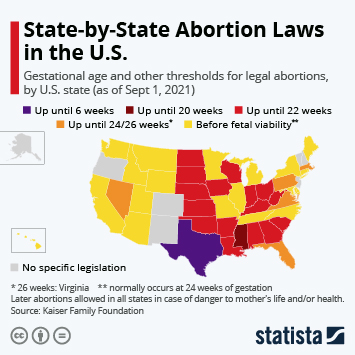 This chart shows the gestational age and other thresholds for legal abortions, by U.S. state (as of Sept 1, 2021).