A new report by complicance software company EQS Group shows that misconduct is widespread in European companies and that it’s also costing employers.

The paper co-authored by the University of Applied Sciences of the Grisons surveyed 1,300 companies in Germany, the UK, France and Switzerland and found that around a third of them recorded misconduct, defined as illegal or unethical actions, for example the falsification of financial data or the targeted exploitation of differences in international legislations. Around one in five companies in the survey said that misconduct had cost them more than €10,000 ($11,600) and around one in ten even said they lost more than €100,000 ($115,600).

Across all markets, large companies of more than 250 employers were disproportionally affected by misconduct and also lost more money because of it on average.

The survey also asked employers about their internal provisions for whistleblowing, which companies might use to learn of misconduct happening. French companies were least likely to have such a system in place at around 54 percent of uptake, while in the UK, more companies – 73 percent – were using one. Internal whistleblowing had the biggest tradition in the UK, with around half of company systems having been implemented in the year 2000 or earlier, compared with just a quarter to a third of systems in the other countries being this long-standing.

Around half of companies with whistleblowing systems said they had received reports through them in 2020. Half of these reports proved relevant in the UK and Switzerland, while that number was at 64 percent for France and only 44 percent for Germany. 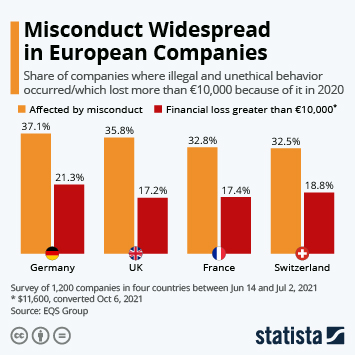 This chart shows the share of companies where illegal and unethical behavior occurred/which lost more than €100,000 because of it in 2020 in selected countries.