According to a report released by the FBI yesterday, losses to cyber crime increased significantly in 2021. The losses - which are located mainly in the U.S. but were collected around the world - are estimated at $6.9 billion last year, up from $4.2 billion in 2020.

The costliest crime recorded by the FBI was business email compromise and personal email compromise, which targets businesses and individuals that engage in wire transfers by breaking into their emails. In 2021, almost $2.4 billion were lost this way.

The report was released on the heels of U.S. warnings about an expected increase in Russian cyber attacks as retaliation for sanctions imposed on the country in the aftermath of its invasion of Ukraine. U.S. President Joe Biden warned businesses on Monday that their vulnerabilities might be exploited by Russian operatives. Other costly cyber crimes with businesses at their center were personal data breaches and corporate data breaches, which occur when criminals steal or release the personal data of individuals or companies previously stored in a secure location.

Out of all victims recorded by the FBI, 59 percent were located in the U.S., 38 percent in the UK and 3 percent elsewhere. 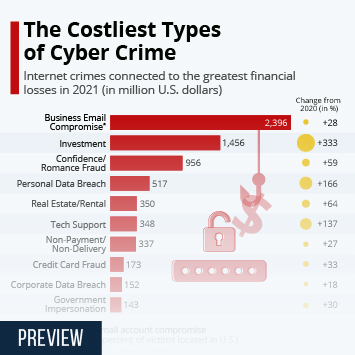 This chart shows the cyber crimes connected to the greatest financial losses in 2021 (in million U.S. dollars).