According to calculations by Our World in Data, 61 percent of the world population has received two doses of one of the several coronavirus vaccines available on the market. The gap between low and upper middle income countries, in particular, seems unbridgable, with vaccination rates of 16 percent in the former and 79 percent in the latter.

This stark contrast is the result of a variety of reasons, but experts agree that there are two key ways to speed up vaccine production and deployment in economically poorer African, Latin American and Asian countries: Technology transfer and the suspension of vaccine patents at least for the duration of the pandemic. Both measures were largely opposed by the European Commission and pharmaceutical companies like Moderna and BioNTech. As our chart based on data collected by Médecins sans Frontières (MSF) shows, 120 non-Western pharmaceutical facilities would have theoretically been ready to mass-produce highly effective mRNA vaccines at the end of 2021.

As MSF points out, mRNA vaccines are simpler to produce and "more predictable and easier to transfer to other manufacturers" than vaccines relying on older technology. With the corresponding knowledge transferred, every company on the list put together by MSF fulfills the requirement for "good manufacturing praxis" (GMP) or has already exported a sterile pharmaceutical product to either the European Union or the United States. The majority of these facilities are located in India (55) and China (34), many of which have already produced the corresponding country's own vaccines like Covaxin, Covilo or CoronaVac, which in turn have not yet been approved for use in the West. The African continent houses eight such facilities in countries like Egypt and Tunisia, while Brazil is the country with the most qualifying factories in Latin America.

While vaccine makers like BioNTech and Moderna cite lacking capacities and qualifications in African, Latin American and Asian countries for their stance against the suspension of coronavirus vaccine patents, the enormous profit margins are likely another factor in the equation. For example, BioNTech generated 19 billion Euros in revenue with its vaccine alone in 2021, while Moderna made $18 billion in the same year. In February of 2022, BioNTech announced the planned deployment of mobile vaccine factory containers to Africa to increase vaccination rates. This decision drew skepticism from human rights groups due to its focus on profit instead of sharing of knowledge and technology with local facilities. 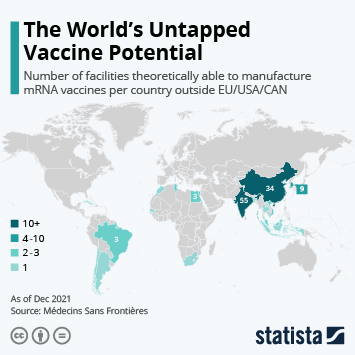 This chart shows the number of facilities able to manufacture mRNA vaccines outside of the EU/USA/CAN.