U.S. President Joe Biden is expected to shortly sign into law the Chips+ bill, aimed at increasing the competitiveness of the U.S. microchip industry, alleviating dependency on Greater China and the shortage of microchips felt globally. The bill passed the Senate in a bipartisan effort before another success in the House, again with several Republicans joining Democrats in their vote. As fears of a confrontation with China are heightening, negotiations that had lasted more than a year finally came to fruition for the bill.

The cost of the bill is expected to come in at around $280 billion. This includes a key provision of around $52 billion that will go directly to U.S. chipmakers over the next five years for the expansion of their facilities as well as for research and development.

For now, Mainland China, Hong Kong and Taiwan remain dominant players in global microchip production, which also allows them to control half of the worldwide export market. Numbers from the UN Comtrade database show that Greater China’s exports of microchips totaled just under $400 billion in the pandemic year of 2020 - the latest for which full data is available. The United States exported semiconductors worth around $44 billion the same year, much less but still the seventh-highest in the world in a market that is dominated by Asia. In 2021, exports out of Greater China rose again to approximately $522 billion, while those out of the U.S. were up to around $53 billion.

As recently as 1990, the U.S. had still produced almost 40 percent of semiconductors globally, with Europe responsible for roughly an equal amount. The growth of cheaper production facilities in Asia, however, created a trend that changed the usual origin of semiconductors fast. By the year 2000, the U.S. and Europe together contributed only slightly more than 40 percent to global chip manufacturing, with Japan, South Korea and Taiwan taking up most of the rest. By 2020, Mainland China was expected to having expanded to as much as a quarter of global production, taking away market shares from competitors in the U.S., Europe and Asia all at the same time.

As supply chain disruptions caused microchip shortages during the Covid-19 pandemic, several countries started initiatives to boost production of the critical asset at home. Before the U.S., Japan and the EU had already announced actions to produce more semiconductors domestically. 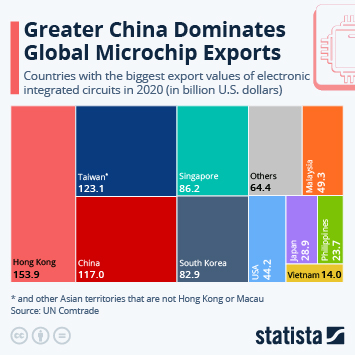 This chart shows countries with the biggest export values of electronic integrated circuits in 2020 (in billion U.S. dollars).