Tesla announced at its annual meeting yesterday that it would in fact move its headquarters to Austin, Texas, from Fremont, California. While CEO Elon Musk pointed out that operations in Texas and California were both continuing to grow, he named the lower cost of living for employees in Texas as one of the reasons for the move. Musk himself had relocated to Texas in December. The state is also home to a launch site of one of Musk's other companies, Space X.

Numbers recently released by Tesla show that the company is in fact ramping up its output massively. Having shot for the moon with its goal to deliver 500,000 vehicles in 2020, Tesla nearly stuck the landing, missing its target by just 450 cars. This year, the electric car maker will surpass that milestone by far, with deliveries in the first nine months of 2021 already exceeding 627,000. Having delivered more than 200,000 cars for the first time in the quarter ending June 30, Q3 deliveries were even more substantial at more than 240,000 vehicles shipped.

When the first Model 3 rolled of the assembly line in July 2017, Tesla had delivered just 183,000 cars in the preceding five years – a number that some of the larger car manufacturers in the world match in a week. The affordable Model 3, marketed as the first mass-market Tesla, was supposed to change that and bring Tesla one step closer to reaching its goal of “accelerating the advent of sustainable transport by bringing compelling mass market electric cars to market”.

And while it took the company nearly three years to make good on its original promise of offering a version of the Model 3 for as little as $35,000, the production ramp-up following the Model 3’s launch in 2017 has been quite impressive. 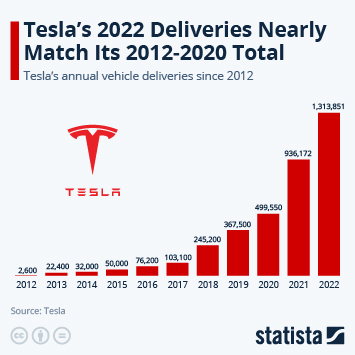