Highlights
Market definition
in-scope / out-of-scope
Reports special
Show more
The Analgesics segment comprises over-the-counter natural and synthetic non-opioid analgesics (only in approved low doses) like Paracetamol, Ibuprofen, Aspirin, Diclofenac and other pain-relieving preparations. Legislation on opioid analgesics differs from country to country. According to the respective state legislation, legal opioid analgesics are included. In Germany, Austria and Switzerland, for instance, opioid analgesics are only included if they are not limited by the narcotics law and do not require prescription. Analgesics are included in the form of pills, capsules, gels and ointments. Not included are prescription medicines (e.g. morphine), anesthetics and homeopathic remedies. Among the top-selling painkillers are Voltaren, Aspirin, Thomapyrin, Ibuprofen, Dolormin, Paracetamol and ASS. It includes both products which are exclusively sold in pharmacies and products which can be purchased elsewhere. Sales by hospitals are not included.

in the Analgesics market in million US$ in percent

The “Revenue” box shows the forecasted revenue development of the selected market (market segment, region) in million US dollars for each year.

in the Analgesics market in US$

Reading Support The average revenue per person in the segment for Analgesics amounts to US$15.97 in 2020.

The ""Average Revenue per Capita"" box shows the average market value of the selected market (market segment, region) per person in US dollars for each year.

in the Analgesics market in percent

Reading Support With 20%, the brand Tylenol is the preferred brand among the respondents in the Analgesics segment in 2019 in the selected region.

The estimated brand preference for the most important brands in the respective market/ segment for one year (2019) is based on the Statistas Global Consumer Survey.

Values are always rounded to 5% steps. Brand shares below 5% are attributed to the category “Others”.

in the Analgesics market in million US$

Reading Support With a market volume of US$5,285m in 2020, most revenue is generated in the United States.

The “Revenue” tab shows a comparison of revenues for the leading economies in the selected market (market segment, region) and year.

A definition and detailed explanation of the displayed markets can be found here. ×
XLS Download

The following Key Market Indicators give an overview of the social and economic outlook of the selected region and provide additional insights into relevant market-specific developments. These indicators, together with data from statistical offices, trade associations and companies serve as the foundation for the Statista market models.

The Analgesics market is built on resources from the Statista platform as well as on in-house market research, national statistical offices, international institutions, trade associations, companies, the trade press, and the experience of our analysts. We evaluate the status quo of the market, monitor trends, and create an independent forecast regarding market developments of the global Analgesics industry.

Tailored to your search demands

For the Analgesics market, our analysts create reports with detailed comparisons and important background information. Get an overview of trends and key players and consult comparisons of the focus regions USA, China, and Europe. 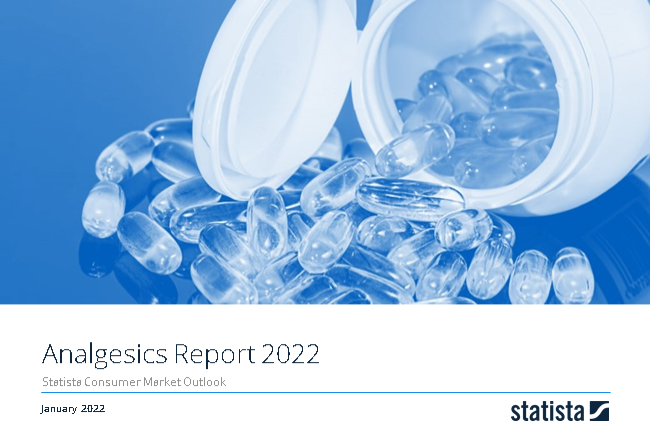 Here you can find more studies and statistics about "Analgesics".

These markets could also be of interest to you

Discover other market segments and categories related to your topic

Save statistic as .XLS

Save statistic as .PNG

We will be happy to make you an individual offer.

The data source is specified individually for each data set. You can find the source in the data box in the lower left corner.

You can find further source information in the methodology section.