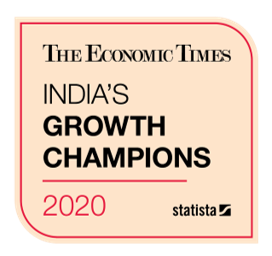 How can I use the award logo?

If your company is award, you have the privilege to get the official license for the special-award-logo. After ordering the logo, it is possible to use the logo on every marketing-channel. For this, we have created logo-files, which are prepared for all means of communication.

The project was advertised online and in print, allowing all eligible companies to register via the websites created by Statista and The Economic Times. In addition, through research in company databases and other public sources Statista has identified more than 9.000 companies in India as potential candidates for the ranking. These companies were invited to participate in the competition by post, email and telephone.

The application phase ran from 24 May 2019 to 06 October 2019. The submitted revenue figures had to be certified by the CFO, CEO or a member of the Executive Committee of the company.

To be included in the list of India’s Growth Champions 2020, a company had to meet the following criteria:

Following the application phase Statista examined the officially stated revenue data of further high profiling public companies in India and added them to the list.