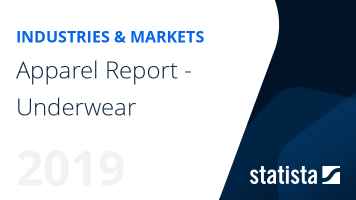 The segment Underwear accounted for 16% of the Apparel revenue in 2018. The worldwide revenue of US$272 billion in 2018 is expected to increase to US$349 billion by 2023. This report from the series of segment reports gives an overview of the Underwear market from an international perspective.

The Apparel segment Underwear encompasses articles of clothing that are worn beneath the outerwear. This market is divided into Women’s Underwear (including corsetry) and Men’s Underwear as well as T-shirts and singlets. The upswing in online shopping and the continuing expansion of major textile chains lead to an increasing pressure on price levels in an ever-growing total market, which is just one explanation for its steady growth. The most valuable fashion brands in the industry are Inditex, H&M, GAP, Fast Retailing and TJX. The Underwear segment has occupied a significant position in the clothing industry.