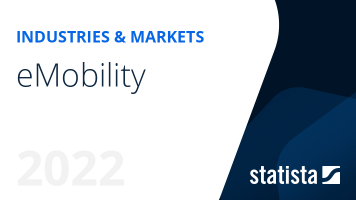 In 2021, global electric vehicle sales surpassed 6.5 million units, an increase of 120% over that of 2020. Currently, Mainland China is leading the way with a market share of almost 50%.

Car manufacturers are pushing to bring out new electric car models and have big plans for the future. The 2021 race for the highest market share was won by the Tesla Model 3 with 8%, followed by Wuling's Hong Guang MINI EV, and Tesla Model Y with 6% each, Volkswagen ID.4 and BYD Qin Plus PHEV with 2% each respectively.

The history of electric vehicles started in the early 1800s, but only took off when Tesla entered the market and reignited public interest in electric cars. In 2021, global electric vehicle sales surpassed 6.5 million units, an increase of 120% over that of 2020. Currently, Mainland China is leading the way with a market share of almost 50%. Car manufacturers are pushing to bring out new electric car models and have big plans for the future. The 2021 race for the highest market share was won by the Tesla Model 3 with 8%, followed by Wuling's Hong Guang MINI EV, and Tesla Model Y with 6% each, Volkswagen ID.4 and BYD Qin Plus PHEV with 2% each respectively.

There are five major drivers of the electric vehicle market: government policies, the Tesla effect, lower battery costs, 5G rollouts, and the launch of the Battery-as-a-Service model. Governments are trying to achieve their emission goals set out in various global agreements and have devised various incentive schemes to increase electric vehicle sales. While electric vehicles are a major step towards achieving environmental goals, Tesla managed to fuse this with high performance and aesthetics, thereby playing a pivotal role in changing the industry’s overall appeal. The significant reduction in the prices of battery packs is also driving mass adoption of these vehicles. Further, 5G rollouts and new business models such as Battery-as-a-Service are expected to drive future growth.

Five main challenges hinder the adoption of electric vehicles: lack of infrastructure (such as charging stations), high upfront costs, lack of consumer knowledge and wrong perceptions, pressure from oil companies and the car manufacturer lobby, and potential long-term effects of the COVID-19 pandemic. Not only are charging stations still very few and far between, but they are also usually manufactured by different suppliers without a standardized charging and payment system. In addition, high upfront costs make electrical vehicles less attractive than traditional internal-combustion engine cars, mainly due to the high battery costs which often account for as much as 50% of the total vehicle cost.

Autonomous driving and electric cars go, without a doubt hand in hand. Thanks to easier integration and component control, it is easier to realize self-driving cars using electric vehicles rather than vehicles with internal combustion engines. While the U.S. has been pioneering this trend, Mainland China will be the market leader. Despite the challenges, lithium-ion batteries are still expected to dominate the battery market for electric vehicles.

This is mainly because the development of new battery technologies is both very expensive and complicated. Moreover, Mainland China’s domination of the lithium-ion battery supply chain is expected to come to an end in the medium to long-term, as the U.S. and Europe are gaining more control over various elements of the supply chain. Interestingly, quantum computing is expected to significantly disrupt the electric vehicle industry, resulting in higher battery ranges, new product launches, and autonomous driving. Due to their low operating costs, electric vehicles are also part of the ride-sharing movement, with many car manufacturers launching electric car-sharing operations. Moreover, the demand for related electronics and software is expected to grow significantly over the next few years.

Lithium-ion batteries dominate the market mainly because they deliver the highest range at a lower cost when compared to any other battery. However, due to limitations such as long charging times, the size, its heavy weight, and limited battery capacity, companies such as Toyota, Volkswagen, Nissan, and Tesla are now investing in solid-state, lithium-sulfur, and zinc-air batteries for their future models. Further, universities, technology companies, and independent battery start-ups are collaborating to develop other types of batteries, such as aluminum-ion, smart membranes, and graphene-based supercapacitors to enable faster charging times and longer life cycles.

Rising pollution levels, potential operational cost savings, and heavy dependence on public transportation are the three major factors driving the gradual switch from hydrocarbon-based to electric public transport. The total number of electric buses in the world is expected to witness a 188% increase from 651,819 in 2021 to about 1.9 million in 2030, with Mainland China accounting for a share of more than 95%. Financial support from the government, a large urban population—and the resultant pollution, a lack of traditional transportation infrastructure, global trade, and increased public awareness are the five key reasons for Mainland China’s dominance.

E-scooters have recently gained in popularity and are believed to be the solution to the last-mile transportation problem in many global markets. Even though the overarching reason behind the development of various alternative fuel technologies is restricting environmental damage mainly caused by polluting vehicles, the e-scooter industry is specifically driven by the rise of micro-mobility. The aim here is to transform urban transportation by using cheaper and faster alternatives to cars, especially in the U.S., Asia, and Latin America.

E-bikes are essentially conventional bikes equipped with a rechargeable battery and motor, helping them gain momentum faster and achieve speeds of up to 30 miles an hour. They look and function just like traditional bikes and give riders the option to pedal when they like.

They are classified according to functionality (mountain bikes, road bikes, hybrid bikes, folding bikes, and utility bikes) or according to design (pedal assist/pedelec, throttle, and speed pedelec). The growing popularity of e-scooters around the world has piqued interest in e-bikes. The first e-bike was manufactured in Japan in 1993, with Yamaha launching its pedal assist bicycle.

As electric drive vehicles are gradually gaining momentum around the world, the next phase of growth is expected to mainly be driven by vans and trucks. The need to switch to cleaner engines is far greater for these larger vehicles, given that they are more polluting than cars. Even though fewer than 5% of vehicles in Europe are commercial vehicles or heavy-duty trucks they contribute to almost 20% of greenhouse gas emissions. One of the main reasons why the light commercial vehicles (LCV) industry is witnessing electric disruption at such a fast pace is its high and predictable usage rate.

Tesla is the most recognized electric vehicle (EV) brand in the world. In 2021, combined sales of the Model 3 and Model Y totaled 911,208 units. Tesla’s success is primarily attributed to its aesthetics and longer ranges compared to other EVs. BYD is one of the largest selling brands in Mainland China, but its focus on international markets is limited. The company’s top-selling brand in 2021 was the Han with sales of over 87,000 units. Volkswagen sold a total of 452,900 EVs in 2021, up 96% as compared to its 231,600 sold in 2020. The other European player BMW has 11 EV models in its portfolio and had over 1 million electric vehicles in circulation by the end of 2021.

Mainland China is by far the market leader, not only in Asia but also worldwide. PEV sales amounted to over 2,734,013 in 2021 - nearly 122 percent more than the combined PEV sales in Europe. South Korea, Japan, and India are the other leading markets in Asia. As for e-LCVs, Mainland China, and South Korea account for a 99% share in the Asian market, with combined sales of over 114,429 units in 2021.


The following makes are included in the report: