Published by
Daniel Slotta,
Dec 9, 2022
The global economy and political structures are going through a metamorphosis and major global powers try to embrace the new reality. Under Trump, the U.S. and China moved towards open competition, the COVID-19 pandemic disrupted global supply chains, and the Russian invasion led to an upheaval in European energy security. The emergence of a multipolar world order puts an end to the ideal of a liberal organization of the world economy. Countries scramble to secure access to strategic resources. And for China, the access to one of the critical resources in semiconductors is SMIC.

Why is SMIC important?

Semiconductor Manufacturing International Corporation is one of China’s largest pure-play semiconductor foundry and a national champion that spearheads the country’s semiconductor technology development. SMIC is based in Shanghai, incorporated in the Cayman Islands, and partly a public company and partly state-owned. It is traded on the Shanghai Stock Exchange as well as the Hong Kong Exchange. However, its largest shareholders include the National Integrated Circuit Industry Investment Fund and the state-owned Datang Telecom Group. The latter is a civilian and military telecommunication equipment manufacturer.

Over the past years, SMIC has developed advanced manufacturing capabilities but is still trailing its major international competitors. SMIC reportedly made significant achievements in key areas, such as the mass production stage of 14-nm process, 90-nm lithography machines, 5-nm etching machines, 12-inch silicon wafers, CPUs, and 5G chips. In addition to that, in a move that surprised the international industry, the foundry has been secretly shipping ICs based on a quasi-7nm process since 2021. In comparison, the global leader TSMC currently mass produces 5-nm wafers and plans to introduce volume production of 3-nm nodes in the second half of 2022.

Rising to the occasion

With increasing international tensions, semiconductor technology has emerged as a key vector of competition. The industry got an initial feeling of the new reality when the U.S. Department of Commerce banned domestic companies from supplying ZTE with products in 2018. Since then, the intensity of sanctions against China’s semiconductor industry has only increased, impacting companies and causing distress to government leaders. The latest iterations of sanctions included a ban on U.S. personnel working in Chinese firms, and comprehensive restrictions on technology access for Chinese firms, effectively attempting to paralyze the industry and prolonging Western technology dominance.

The impact from U.S.-led sanctions confirmed an ominous fear of the Chinese leadership that the only way forward is semiconductor independence. Already in documents from the 90s, policymakers emphasize the importance of technology autonomy. Over the past three decades, the goals and objectives have become more concrete. In the policy initiative “Made in China 2025”, Beijing stated that it wanted to reach semiconductor self-sufficiency by 2030.
Even though the domestic industry is still far from reaching its goal, the recent industry sanction further stresses the urgency of achieving independence. Furthermore, it reveals the pressure on Chinese companies, like SMIC, to catch up to their international counterparts and secure Chinese access to semiconductors sooner rather than later.

In the following 6 chapters, you will quickly find the 26 most important statistics relating to "Semiconductor Manufacturing International Corporation". 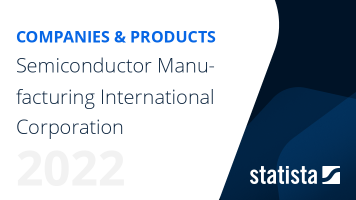 The most important key figures provide you with a compact summary of the topic of "Semiconductor Manufacturing International Corporation" and take you straight to the corresponding statistics.