Augmented reality (AR) glasses, a categorization that can also include AR headsets and smart glasses, are devices that enable user participation in AR – the combination of the real world and computer-generated content, live and in real-time. On a consumer level, the AR glasses market was valued at just over one billion U.S. dollars in 2022, although is projected to rise to over nine billion U.S. dollars by 2027. In line with this, the number of reachable users of AR glasses is also expected to grow in the coming years.

AR glasses vendors such as Microsoft, Magic Leap, and Nreal continue to innovate, developing devices that are helping to support the increased adoption of AR across a range of sectors. Another example of this is Vuzix, an American optical technology firm developing AR solutions for healthcare, manufacturing, and warehouse environments. It is expected that AR glasses vendors will face even greater competition in the coming years as other technology firms release AR devices onto the market. One example is Apple, who has expressed its interest in entering the AR glasses market, with the company set to release the first such product in 2023.
This text provides general information. Statista assumes no liability for the information given being complete or correct. Due to varying update cycles, statistics can display more up-to-date data than referenced in the text.

Thomas Alsop
Research expert covering the global hardware industry
Get in touch with us now
Published by Thomas Alsop, Nov 15, 2022

AR glasses market in the U.S. 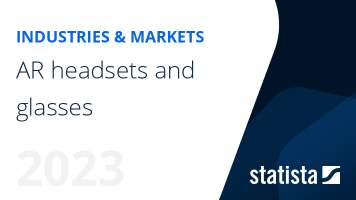 The most important key figures provide you with a compact summary of the topic of "AR glasses" and take you straight to the corresponding statistics.