Groupe SEB claims a long history, tracing the origins of the company and the group to a tinware workshop in Burgundy created by Antione Lescure in 1857. The French company industrialized in the late stages of the 19th century. It grew steadily and became a publicly traded company in 1952. It began to shift to household appliances early in its history, producing a pressure cooker in 1953, a steam iron in 1954, a deep frier in 1967 to name a few. The company has continued to improve and innovate in the household appliance market since then and is one of the leading manufacturers of household appliances worldwide. Groupe SEB is headquartered in France but has subsidiaries in Asia, Latin America, North America, and Africa.

The household appliance market is large and expected to exceed 450 billion U.S. dollars by 2023. It is dominated by six companies that together account for nearly 30 percent of the entire market, with Groupe SEB being the 7th largest and showing a considerable amount of growth in recent years. Most of Groupe SEB’s sales are in Western Europe, accounting for nearly 38 percent of the group’s total revenue share. Next in line is China alone, with nearly 23 percent share. Other markets are substantially smaller, being 15 percent or less. The company’s growth can be attributed to the considerable amount of money invested in research and development. Moreover, advertisement costs alone were nearly 200 million euros in 2021.

Groupe SEB has, like most large companies, a large greenhouse gas footprint. While it has made consistent attempts to reduce its carbon footprint, the amount of greenhouse gas emissions has remained similar since 2017, peaking at 224,014 tons of CO2 equivalent in 2021. This lack of reduction of greenhouse gas emissions can most evidently be linked to a considerable increase in the consumption of raw materials. Their consumption, from metals to heating oil. has increased, in many cases to a large degree.
This text provides general information. Statista assumes no liability for the information given being complete or correct. Due to varying update cycles, statistics can display more up-to-date data than referenced in the text. 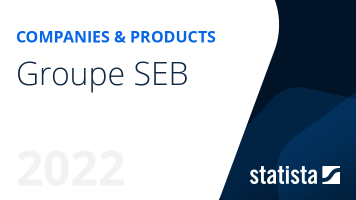 The most important key figures provide you with a compact summary of the topic of "Groupe SEB" and take you straight to the corresponding statistics.