Veterans in the U.S. - statistics & facts

Published by Erin Duffin, Apr 1, 2021
Following the most recent wars in Iraq and Afghanistan, the number of veterans in the United States in 2019 was over 17.42 million. These brave men and women are rightfully lauded for the sacrifices they made for their country, as well as the risks they took. Veterans come from all corners of the country, the highest number of living veterans being in California.
The government agency responsible for ensuring veterans are cared for upon their return from war is the U.S. Department of Veterans Affairs. With the number of veterans in the country being so high, it is unsurprising that the financial outlay of the U.S. Department of Veterans Affairs was 199.58 billion U.S. dollars in 2019. That number is projected to increase to 284.6 billion in 2025.

Despite the vast share of resources allocated to the U.S. Department of Veterans Affairs, a large number of veterans live under the poverty line. This phenomenon affects veterans of all ages but it is particularly rife among those aged 65 and older. Many veterans return having entered the military at a young age and therefore are sometimes without employable skills suited to the domestic economy. This is one barrier the government is trying to help veterans overcome. Interestingly, the average veteran earns more than the average non-veteran in the wider economy. The presence of poverty among veterans therefore warrants closer attention among policy makers as it is clear an economically stable future is possible for veterans.

Another potential barrier for veterans returning home and attempting to reintegrate into the workforce and society as a whole is the presence of health conditions. This barrier is not only for the veterans themselves but a barrier to a so-called normal life for those who care for veterans. In 2019 about 1.66 million veterans had a service-connected disability rating of 70 percent or higher. These veterans are unable to live on their own without the aid of a caregiver for daily functions. The price they paid for their country is taxing on them and many of those around them.

In the following 4 chapters, you will quickly find the 22 most important statistics relating to "Veterans".

The most important key figures provide you with a compact summary of the topic of "Veterans" and take you straight to the corresponding statistics.

Veteran health in the U.S. 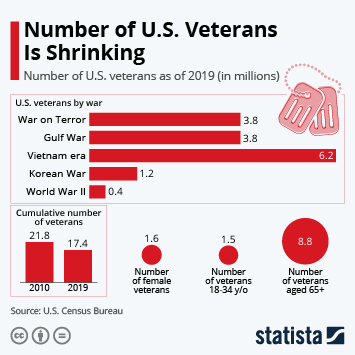