Intel Corporation is a multinational company whose main business is in the manufacturing of semiconductor chips. Headquartered in Santa Clara, California, the company was founded in 1968 by the scientists Robert Noyce and Gordon Moore. It is one of the world’s largest and most valuable semiconductor chip makers, generating over 79 billion U.S. dollars in global annual revenue in 2021. Intel has steadily increased its annual research and development expenditure, surpassing 15 billion U.S. dollars in 2021, supporting the company as it maintains its position in the market by continuing to develop innovative products and services.

Intel’s largest segment in terms of revenue is the Client Computing Group (CCG), the business unit that consists of PC processors and related component sales. In 2021, CCG revenue amounted to more than 40 billion U.S. dollars, while Data Center Group (DCG) revenue equated to around 26 billion U.S. dollars. Most of Intel's revenue stems from China, Singapore, the United States, and Taiwan, while approximately 20 percent comes from the rest of the world. Globally, the company employs more than 120 thousand people, with women accounting for close to 30 percent of the total workforce - a share that has been steadily growing over recent years.

In 2021, Intel announced its IDM 2.0 strategy, a plan that includes significant manufacturing expansions, plans for Intel to become a major provider of foundry capacity in the U.S. and Europe to serve customers globally, and expansion of Intel’s use of external foundries for some of its products. To support this, the company established a new standalone business unit, Intel Foundry Services (IFS), as well as the announcement in 2022 of a new one billion U.S. dollar fund to support early-stage startups and established companies building disruptive technologies for the foundry ecosystem. Also in 2022, Intel announced the 5.4 billion U.S. dollar acquisition of Tower Semiconductor as it looks to gain additional foundry experience and build-upon customer relationships to accelerate the growth of its foundry services offering.

Competitors in the semiconductor industry

The company is a major player in the global semiconductor market with a market share of around 10 to 15 percent over the past ten years. Samsung Electronics, SK Hynix, Micron Technology, Qualcomm, Broadcom, and Texas Instruments are amongst Intel’s competitors in the semiconductor industry. With regards to computer processors and graphics, Intel’s main competitors are AMD and Nvidia - fellow U.S. technology firms specializing in the development of processor chips. Intel also faces competition from the British semiconductor and software design company Arm Limited, although Intel has stated its intention to manufacture both Arm and RISC-V processor chips in the future as part of its foundry services development.
This text provides general information. Statista assumes no liability for the information given being complete or correct. Due to varying update cycles, statistics can display more up-to-date data than referenced in the text.

Thomas Alsop
Research expert covering the global hardware industry
Get in touch with us now
Published by Thomas Alsop, Feb 23, 2022

Intel's expenditure on research and development 2004-2021

Most valuable technology brands worldwide in 2021 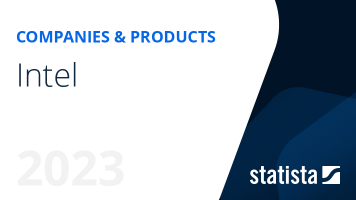 The most important key figures provide you with a compact summary of the topic of "Intel" and take you straight to the corresponding statistics.