Published by Statista Research Department, Dec 1, 2020
Children are a special target group to food marketers as they tend to influence their parents’ buying decisions while grocery shopping. Additionally, they will have their own purchasing power in the near future. U.S. retailers recorded sales of children's food and beverages amounting to about 35.06 billion U.S. dollars in 2015, figure which has risen to 41.09 billion U.S. dollars in 2018.
In the U.S. restaurant industry one of the leading trends was healthful kids’ meals in 2018. The leading trends in kids' meals, specifically, were mostly related to the nutritional value of the food, with healthful kids' meals, fruit and vegetable side options, and whole grain items ranking as the top three.

Despite the rise of healthy options in kids’ menus, a 2016 survey found that 91 percent of U.S. adults bought fast food for their children in the past week, up from 79 percent in 2010. In that time frame, the share of kids’ meals being purchased for kids has also decreased, indicating that children are eating more frequently from the regular menu at fast food restaurants.

When it comes to economic challenges that many U.S. families are facing today, kids are especially vulnerable. According to a 2017 survey, 15.7 percent of the households with children under the age of 18 reported some sort of food insecurity. The children who live with only their mother were the most affected.

In the following 4 chapters, you will quickly find the 20 most important statistics relating to "Children's Food and Beverages ". 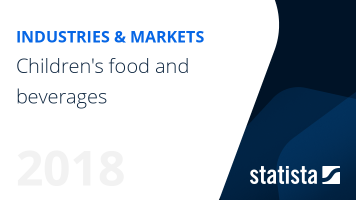 The most important key figures provide you with a compact summary of the topic of "Children's Food and Beverages " and take you straight to the corresponding statistics.