Digital coupons and deals in the United States - statistics & facts

From newspaper clippings and print circulars to mobile apps and QR codes: The coupon landscape in the United States has undergone a significant digital transformation over the past decade. Thanks to the global growth of e-commerce and continuous shifts in consumer preference towards online shopping platforms, companies increasingly embrace digital coupons as part of their marketing strategies. By offering digital deals, businesses can address larger potential audiences, build brand awareness, and boost engagement rates and sales. Considering that roughly 80 percent of all U.S. consumers have used online coupons before, rebates in all their forms remain one of the most popular marketing tools for brands even over a century after their debut.

In recent years, shopping behavior has visibly changed worldwide due to the continuous and rapid increase in internet usage. While many shoppers still prefer to receive their coupons in print and by mail, consumers' desire for good deals and bargains has predominantly moved online. In the U.S., nearly two in ten consumers find coupon and deal platforms as a source of inspiration for new product purchases, and social media accounts for an even larger share of exposure. According to a 2021 study, Facebook is the leading social media platform on which users discover coupons, with over 40 percent of surveyed consumers reporting using it when looking for digital deals.

Alongside social media, many consumers look to websites and rebate-specific apps as their primary way to discover coupons. Another survey found that only about one in ten online shoppers never use coupon aggregator platforms while shopping online. However, regardless of the preferred source, approximately 37 percent of shoppers usually or always attempted to find coupons before buying products online in the same year.

As of 2022, the most visited coupon website in the United States was slickdeals.net, boasting nearly 20 percent of site visits among its competition. By name, one notable competitor is Groupon. While Groupon has been a well-known market leader in the country’s bargain business for almost a decade and remains a popular option for rebates, both the Groupon website and app are beginning to lag. 2021 marked the fifth year of Groupon’s revenue decline, and the number of Groupon’s active customers is also decreasing annually as many online retailers now provide personalized discount offers.

In addition, the U.S. inflation rate peaked for the first time in more than 40 years, and gas prices were at an all-time high in 2022. Under these circumstances, it is no wonder U.S. consumers are focused on making the most of the newly popular Upside-Cash back on gas & food app to save money on gas and food.
This text provides general information. Statista assumes no liability for the information given being complete or correct. Due to varying update cycles, statistics can display more up-to-date data than referenced in the text.
Published by Statista Research Department, Jun 29, 2022

Leading coupons and rebates websites in the U.S. 2022, based on visit share

Sources of inspiration for new products in the U.S. 2022

Leading coupons and rebates websites in the U.S. 2022, based on visit share

Leading discount and offer apps in the U.S. 2021, by downloads

Sources of information about products in the U.S. 2022 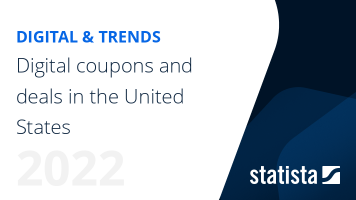 The most important key figures provide you with a compact summary of the topic of "Digital coupons and deals in the United States" and take you straight to the corresponding statistics.