Published by
Aaron O'Neill,
Apr 1, 2021
Bangladesh has one of the largest populations in the world with over 164 million inhabitants (as of 2017). Due to Bangladesh’s relatively small land mass, its population density is also one of the highest in the world; with more than 1,200 inhabitants per square km, Bangladesh’s population density is more than 3 times that of India.
Bangladesh’s population growth hovers steadily around the 1.1 percent mark with a current downward trend. The country has made great efforts in spreading birth control, results of which can be observed in the reduction of the fertility rate, bringing it down to an average of about 2 children per woman in 2015. The improvement in healthcare is also reflected in the steady increase in life expectancy, and an increase in the average age of the population.

After India gained independence from British rule in 1947, current Bangladesh was partitioned as a part of Pakistan and referred to as West Pakistan. In 1971, Bangladesh became an independent nation. A parliamentary democracy system of governance was adopted. Bangladesh is a founding member of SAARC (South Asian Association for Regional Co-operation), formed in 1985 by the eight countries of the Indian subcontinent. Nowadays, the country's capital Dhaka is also its largest city with over 7 million inhabitants.

Bangladesh has a growing economy, having maintained a steady GDP growth averaging above 6 percent since 2010. As in most growing economies, contribution of the agricultural sector to GDP has been on a steady decline, with services making up most of GDP, followed by the industries sector.

Although the agriculture sector contributes the least to national GDP, it provides employment to almost half of Bangladesh’s workforce. Bangladesh operates a thriving textile and clothing export industry and is one of the world’s largest garment exporters. Garments account for almost 80 percent of its total exports. The country has managed to keep its inflation rate under 8 percent since 2012. The national debt is predicted to remain steady in the years to come, currently standing at about 34 percent of GDP.

In the following 4 chapters, you will quickly find the 36 most important statistics relating to "Bangladesh". 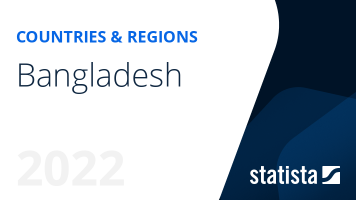 The most important key figures provide you with a compact summary of the topic of "Bangladesh" and take you straight to the corresponding statistics. 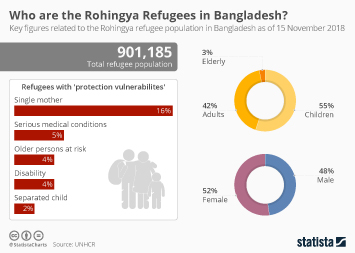 Who are the Rohingya Refugees in Bangladesh? 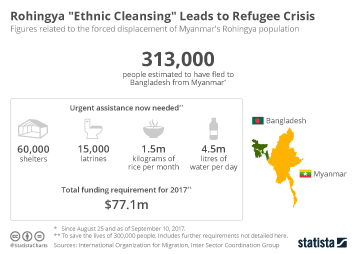