The WhiteWave Foods Company was acquired by Danone in 2017. The original company was founded in 1977 and had four product divisions; namely Plant-Based Foods and Beverages, Coffee Creamers and Beverages, Premium Dairy and Organic Salads, Fruits and Vegetables. The firm operated in North America and Europe and also held a 49 percent ownership in a joint venture that sells branded plant-beverages in China. The WhiteWave Foods Company’s product portfolio in North America contains widely-known brands such as Silk and So Delicious, International Delight and Horizon Organic. In Europe, well-recognized brands include Alpro and Provamel. In China, its plant-based beverages were traded under the Silk ZhiPuMoFang brand. As of January 2017, the company employed about 5,800 people worldwide.
The WhiteWave Foods Company was rated among the leading beverages companies worldwide in 2014. The company generated net sales amounting to 4.2 billion U.S. dollars in 2016. Its segment Americas Foods and Beverages brought in the lion’s share of sales in that year. Of the four product categories, plant-based food and beverages, which includes products such as almond milk, soy milk or coconut milk, accounted for about 1.6 billion U.S. dollars in sales. In order to promote its products, the company spent about 227.7 million U.S. dollars on advertising activities in 2016.

Category-wise, the company was rated as the leading almond milk vendor in the United States in 2016. Within other categories such as coffee creamer and refrigerated skim and low-fat milk, The WhiteWave Foods Company also ranked among the industry leaders.
This text provides general information. Statista assumes no liability for the information given being complete or correct. Due to varying update cycles, statistics can display more up-to-date data than referenced in the text.
Published by Statista Research Department, Nov 16, 2021

Largest dairy foods processors in North America 2021, based on sales 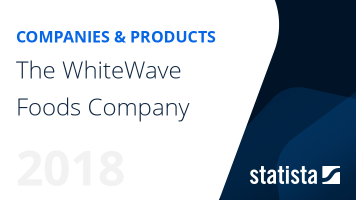 The most important key figures provide you with a compact summary of the topic of "The WhiteWave Foods Company" and take you straight to the corresponding statistics.