Published by
Justina Alexandra Sava,
Sep 21, 2022
Telefónica is one of the largest telecommunication companies in the world, providing telecommunication services in more than 20 countries. Initially founded in Madrid in 1924 as Compañía Telefónica Nacional de España, the company has a solid presence in Spain, as well as in the rest of Europe and Latin America. Telefónica’s major brands are: Telefónica, Movistar, O2 and Vivo. Telefónica is the corporate brand, while Movistar targets the Spanish-speaking market, O2 provides telecom services in Germany and the UK, and Vivo in Brazil. In Europe, Telefónica's main competitors are Deutsche Telekom, Vodafone, and Orange. Telefónica’s services vary from mobile, fixed and broadband networks to pay TV services and other digital solutions.

Over the past years, Telefónica’s revenue fluctuated according to the company’s financial transactions and spin-offs. In 2021, Telefónica recorded a revenue worth slightly above 39 billion euros, down from 43 billion euros in 2020. As expected, in 2021, a third of the company’s revenue was generated in Spain, while another 21 percent was from Latin America, where Telefónica provides its services in countries such as: Colombia, Mexico, Ecuador, Venezuela, Argentina, Chile, Peru and Uruguay. While Telefónica’s revenue has been decreasing over the past years due to various reasons, the same cannot be said about its net profit figures. In 2021, its net profit peaked at 10.7 billion euros, marking Telefónica’s second net profit of more than 10 billion euros since 2006.

The number of Telefónica's fixed-line telephony accesses stood at 30 million worldwide in 2021. Telefónica has also managed to increase its number of prepaid and contract mobile subscribers over the last few years. Prepaid and contract subscriptions worldwide rose from around 238 million in 2011 to nearly 250 million by 2021. Data and internet access is also a popular service offered by Telefónica. In 2021, the number of data and internet accesses was over 48 million, distributed between broadband and fiber.

The king of pay TV market

Currently, Telefónica has more than 11 million pay-TV subscribers worldwide. Latin America is one the most important markets for this service, as Telefónica holds six percent of the Latin American pay-TV market. The presence of the Spanish telecom company in the region has also been growing over the years, as the number of pay-TV subscribers jumped from nearly 2.8 million in December 2013 to approximately four million as of December 2021.

In the following 5 chapters, you will quickly find the 29 most important statistics relating to "Telefónica". 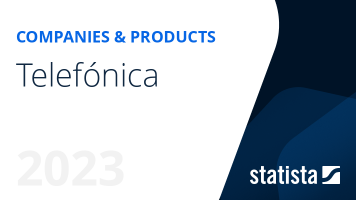 The most important key figures provide you with a compact summary of the topic of "Telefónica" and take you straight to the corresponding statistics.