Since the development of the first modified DNA molecule in 1972, genetically modified organisms (GMOs) have become widely used in many fields of scientific research and agriculture. Created with the aim of enhancing or introducing new traits to an organism, GMOs possess novel gene combinations which have been altered using genetic engineering techniques. GM crops for example, are often engineered to include traits of pest or disease resistance, herbicide resistance, or reduced spoilage.

In Canada, GM crops are largely produced in Ontario and Quebec. Currently, there are four genetically modified crops available on the market, including canola, soybeans, grain corn and sugar beets, with several other varieties approved by the government. In 2021, it was estimated that over 8.6 million hectares of GM canola were seeded in Canada, accounting for a 95 percent share of all canola seeded that year. Since the introduction of GM crops to Canada 20 years ago, it has become one of the leading countries to produce genetically modified crops worldwide, ranking in fourth place behind the United States, Brazil, and Argentina.

Despite the intended benefits of genetically modified crops, their use in agriculture has not been without controversy. In 2019, almost 40 percent of Canadians still voiced concerns about eating food from genetically engineered crops. As a result, the majority of consumers believe GM foods should be labelled and question whether they pose any risks to human health or the environment. Just under 40 percent of Canadians do agree that genetically modified foods are safe to eat, however, and just over half of consumers would consider eating genetically modified crops in the future.
This text provides general information. Statista assumes no liability for the information given being complete or correct. Due to varying update cycles, statistics can display more up-to-date data than referenced in the text.

Global genetically modified crops by countries 2019, based on acreage 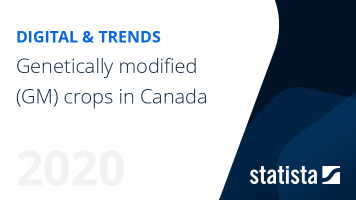 The most important key figures provide you with a compact summary of the topic of "Genetically modified (GM) crops in Canada" and take you straight to the corresponding statistics.