Published by
M. Shahbandeh,
Nov 29, 2021
Tyson Foods Inc. was established by John W. Tyson in 1935, and as of 2021, it employed 137,000 people, 12,000 of which were in the U.S. The company supplies value-added chicken, beef and pork to retail grocers, broad line foodservice distributors and national fast food and full service restaurant chains. It provides chicken supplies to all brands chains, including KFC and Taco Bell, as well as McDonald's, Burger King, small restaurant businesses, and prisons. The company manufactures a wide variety of processed meat products at its 123 food processing plants. It produces products such as Buffalo wings, boneless Buffalo wings, chicken nuggets and tenders. It operates through four segments: Chicken, Beef, Pork and Prepared Foods. In 2019, Tyson introduced a line of plant-based products called Raised & Rooted that produces vegetarian burgers, nuggets, and sausages.

U.S. leader in production and export

Tyson Foods Inc. is one of the leading global companies in the food industry, headquartered in Springdale, Arkansas. The company is the world's and the U.S. largest processor of chicken, beef and pork. In 2019, the company was one of the most valuable food brands worldwide. Tyson Foods annually exports the largest percentage of beef out of the United States. Together with its subsidiaries, it operates many food brands, including Jimmy Dean, Hillshire Farm, Sara Lee, Ball Park, Wright, Aidells, and State Fair. Altogether, the company spent some 246 million U.S. dollars on advertising worldwide in 2021.

Consumer trends in the U.S.

In 2020, chicken was the most commonly consumed meat per capita in the U.S. and is projected to increase by almost 4 pounds per person in 2030. Tyson was the second ranked food and beverage company in North America in 2021, based on sales amounting to a little over 40 billion U.S. dollars and an estimated 27 million Americans bought Tyson frozen hot snacks. A survey in 2020 also revealed that the top choice of frozen fried chicken among Americans is the Tyson brand.

In the following 4 chapters, you will quickly find the 22 most important statistics relating to "Tyson Foods". 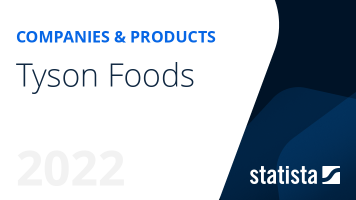 The most important key figures provide you with a compact summary of the topic of "Tyson Foods" and take you straight to the corresponding statistics.