Published by Statista Research Department, Jan 12, 2022
Russia is a country which has been part of an economic rollercoaster as of recent years. For a long time it was at the forefront of the financial and retail world. However times have changed and as of late markets have taken an impact. Looking at the overall fashion market there has been a decrease in sales volumes. Not only have clothing sales seen a decline in sales, but the shoe industry and the fashion accessories market have felt the impact too.
The Russian fashion market is full of medium to high-end brands, accounting for a significant proportion of the marketplace. Even though the mid-price sector has experienced a decline, 10 percent of the market is still controlled by high-end fashion companies. Brands such as Chanel and Louis Vuitton have an almost equal hold on the market, with both high-end brands being major players in Russia.

Russia's fashion market has expanded with influences from all over the world. The footwear market now shows companies like Adidas holding a strong edge over many Russian retail brands. However, the main shoe retailer is still Russian-owned Centrobuv, with a market share of 5.5 percent and a total turnover of 41.1 billion roubles in 2014, the largest turnover of any Russian shoe retailer.

The online marketplace also has prominence in Russia, with shops such as Wildberries.ru showing a strong presence among online retailers.

In the following 6 chapters, you will quickly find the 40 most important statistics relating to "Apparel and footwear markets in Russia". 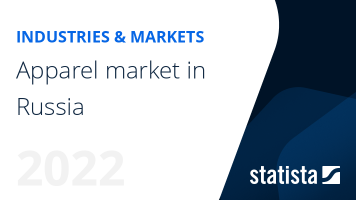 The most important key figures provide you with a compact summary of the topic of "Apparel and footwear markets in Russia" and take you straight to the corresponding statistics.