The Ultimate Fighting Championship (UFC), owned by William Morris Endeavor and presided over by Dana White, is a mixed martial arts promotion company which hosts events worldwide since November 12, 1993. The company's brand value has drastically improved in recent years, having increased by 335 percent in a single year, which relates to the sport having gained popularity caused in part by interest in specific star fighters such as Conor McGregor or Ronda Rousey. The drastic growth of the company catapulted the UFC among the most valuable sports business brands worldwide.
The match between Conor McGregor and Nate Diaz at UFC 202 on August 20, 2016 pulled in an all time high, at the time, of the leading buy-rates of UFC pay-per-view events with a total of 1.65 million pay-per-view buys. It was later superseded by UFC 229 - Khabib vs Conor on October 6th 2018, reaching 2.4 million pay-per-view buys. The average number of pay-per-view buys fluctuated significantly with 2018 having an average of roughly 447 thousand buys per event. In America the prime segment of fans appear to be middle aged, between the age of 30 and 49 years or younger, as reflected in the share of Americans who watched a pay-per-view event or the proportion of Americans who visited UFC.com. The highest live attendance at events was seen at UFC 193 - Roussey vs Holm on November 14th 2015 with a total of 56,214 attendees.

The 39 UFC events of 2018 featured 474 fights, of which in recent years around 145 ended in knockouts and roughly 90 ended in submission. The most popular type of submission in the UFC is the rear naked choke. Georges St-Pierre currently holds the record for most takedowns in UFC fights as well as most strikes landed.
This text provides general information. Statista assumes no liability for the information given being complete or correct. Due to varying update cycles, statistics can display more up-to-date data than referenced in the text.
Published by Statista Research Department, Aug 29, 2019

UFC: events with the highest live attendance as of August 2022 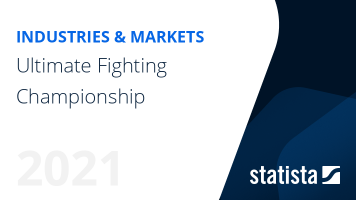 The most important key figures provide you with a compact summary of the topic of "Ultimate Fighting Championship (UFC)" and take you straight to the corresponding statistics.