The North American Free Trade Agreement (NAFTA) was a trade agreement between the United States, Canada, and Mexico, which came into force on January 1, 1994, creating one of the world’s largest free trade zones. The purpose of NAFTA was to remove barriers to the exchange of goods and services cross-border, and to increase the competitiveness of all three signatory countries in the global marketplace. NAFTA strongly focused on trade liberalization in agriculture, textiles, and automobile manufacturing. The agreement also sought to protect intellectual property, establish dispute-resolution mechanisms, and implement labor and environmental safeguards.
NAFTA was seen as highly controversial, and it is still unclear whether the trade agreement has presented more economic advantages or disadvantages for the signatory countries. As of 2014, an estimated 630 billion dollars of U.S. cumulative growth in import and export trade volume was attributable to the implementation of NAFTA. More than 2.2 million U.S. jobs were supported by goods exported to NAFTA countries in 2015. The U.S. is not the only country benefiting from its NAFTA membership. Roughly 250 billion U.S. dollars of Canada’s cumulative growth in trade volume was attributable to NAFTA.

In September 2018, the participating members of NAFTA replaced the agreement with the United States–Mexico–Canada Agreement (USMCA) which was ratified in March 2020. The USMCA took full effect on July 1, 2020 and is still in place today.
This text provides general information. Statista assumes no liability for the information given being complete or correct. Due to varying update cycles, statistics can display more up-to-date data than referenced in the text.
Published by Statista Research Department, Nov 22, 2022

Import and Export trade volume growth in NAFTA countries, as of 2014

Import and Export trade volume growth in NAFTA countries, as of 2014

Percentage of total U.S merchandise exports that went to NAFTA countries in 2019
33.42% 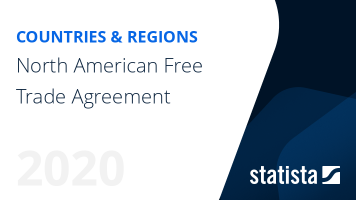 The most important key figures provide you with a compact summary of the topic of "North American Free Trade Agreement" and take you straight to the corresponding statistics.