Autism spectrum disorder (ASD) includes a range of disabilities characterized by repetitive behaviors, sensory issues, and difficulties with speech, nonverbal communication and socializing. The degree of disability varies from person to person and can involve mild impairment from symptoms to severe disability in which extensive support is required. The word “spectrum” is used to describe this wide array of disability degrees and symptoms, which includes Asperger’s syndrome and Autistic disorder. Signs of ASD are usually recognized early in life, with diagnosis in the United States typically found to occur between 38 to 57 months after birth.

Prevalence of autism in the United States

In 2016, it was estimated that 18.5 out of every 1,000 children in the U.S. had ASD, more than double the rate of 6.7 per 1,000 for the year 2000. There is no concrete explanation for the rise in ASD rates that started in the 1970’s, however genes, environmental factors, and changes in the definition and diagnosis of ASD have all been thought to play a role. The prevalence of ASD is unevenly distributed between the genders, with males disproportionately diagnosed with such disorders.

Although autism spectrum disorder can be severe and life impairing, much misinformation surrounds the conditions on the spectrum. Early treatment and proper care can significantly reduce difficulties among those diagnosed, and help to develop the strengths that individuals with such disorders possess. Furthermore, even though the exact causes of ASD remain a mystery, it is important to dispel myths surrounding the disorder to promote open dialogue and eliminate unreasonable fears and prejudice. For example, a survey from 2019 found that 10 percent of U.S. adults thought certain vaccines caused autism and a further 46 percent were unsure, despite no evidence of any such connection.
This text provides general information. Statista assumes no liability for the information given being complete or correct. Due to varying update cycles, statistics can display more up-to-date data than referenced in the text.

John Elflein
Research expert covering health and health care
Get in touch with us now
Published by John Elflein, Jul 16, 2021

Percentage of U.S. children aged 3-17 years ever diagnosed with ASD
2.5%

U.S. children diagnosed with a developmental disability as of 2015-2018, by condition

Prevalence of autism in U.S. children aged 8 years in selected states by race 2018 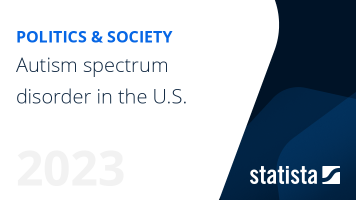 The most important key figures provide you with a compact summary of the topic of "Autism spectrum disorder in the U.S." and take you straight to the corresponding statistics.

Mental health issues in the U.S.
Alzheimer's and other dementias
Children's health in the U.S.