Colombia, located in Northern South America, has an area of approximately 1.14 million square kilometers, making it one of the largest countries in the world. Currently, it is home to about 50 million people, a number, which is estimated to increase by roughly another three million until 2026. Colombia is one of the most-populous countries in Latin America. Its capital, Bogotá, is the most populated city in the country, with almost eight million people living there. Despite the fact that Colombia’s population has grown steadily, the fertility rate in the country is on the decline. The average life expectancy, on the other hand, has seen a slight increase in the last years.

The Colombian economy showed a strong performance before slumping in 2015 and 2016, picking up partially before plummeting again in 2020. This slump of the country’s GDP growth rate can consequently be observed in its GDP per capita, which also slumped to its lowest values in years during that time. It is, however, expected to recover in the next few years. Despite the slight economic recovery experienced after 2016, Colombia's unemployment rate continued to increase, soaring in 2020 to its highest level since the beginning of the 21st century.

The services sector is the most important one when it comes to contributing to Colombia's GDP, followed by the industry sector. Together, they accounted for more than 84 percent of the country’s GDP. Although agriculture is an important sector for Colombians, it hardly contributes to the country's overall economy.

In the following 4 chapters, you will quickly find the 42 most important statistics relating to "Colombia". 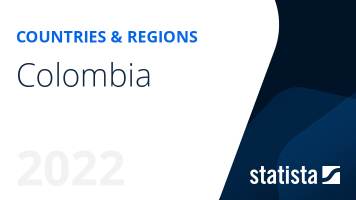 The most important key figures provide you with a compact summary of the topic of "Colombia" and take you straight to the corresponding statistics. 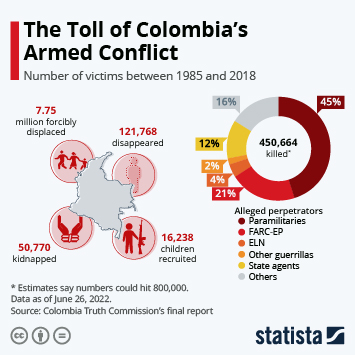 How Many Victims Has Colombia’s Armed Conflict Claimed? 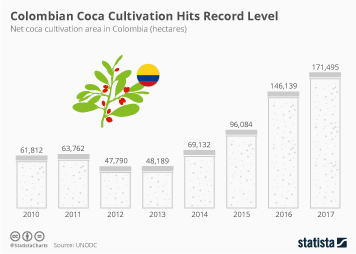