Published by Statista Research Department, Dec 3, 2020
The theatre industry in the United Kingdom is a fundamental part of the country's arts and culture sector. Over 19 million theatre tickets were sold across the UK in 2016, with London regarded as the biggest market. Gross box office revenues for London theatres reached roughly 645 million British pounds in 2016, earned primarily through West End theatre venues.
London theatreland or the West End is the area of central London with the highest concentration of commercial theatres. Along with Broadway in New York, it is one of the most popular theatre districts for English speaking performances in the world. Musicals are the most popular form of theatre, recording the highest attendance figures for performances in London. In 2016, box office revenues from London musicals valued 401 million British pounds.

The arts and cultural industries in England receive public funding through Arts Council England. Theatre is among the most subsidized art forms in England, although subsidized theatre organizations mostly generate the majority of their income through their own trading activities. For example the Royal National Theatre, one of the most publically funded theatres in the UK, also earns substantial revenues through box office sales. Paid attendance at the National Theatre amounted to 2.3 million in 2015/16.

Despite competition from other forms of entertainment, theatre and performing arts attendance remains relatively stable. According to a 2015/16 participation survey, around 22 percent of adults in England had attended a play and 21 percent a musical in the last 12 months. Of theatergoers, 35 percent had been to a show three or more times in the last year.

In the following 5 chapters, you will quickly find the 31 most important statistics relating to "Theatre and the West End in the United Kingdom (UK)". 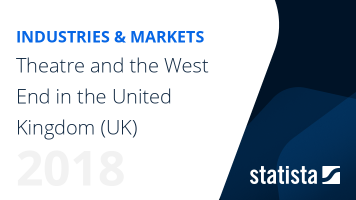 The most important key figures provide you with a compact summary of the topic of "Theatre and the West End in the United Kingdom (UK)" and take you straight to the corresponding statistics.

Theater and Broadway in the U.S.