Published by Jan Conway, Nov 10, 2021
Gin is a clear alcoholic spirit which is distilled from grain or malt and derives its predominant flavor from juniper berries. Some of the world’s leading gin brands include popular London dry gin, Gordon’s, India’s Bombay Sapphire and, with by far the most popularity worldwide, Ginebra San Miguel of the Philippines which sold a volume of over 31 million 9 liter cases in 2020 alone. Gin has the fifth highest sales volume in the U.S. spirits industry behind vodka, whiskey, rum and tequila.
The earliest origins of gin can be traced to the early Middle Ages, stemming from the juniper-flavored traditional liquor of the Netherlands and Belgium called "genever". The word gin is a shortened form of the word "genever". Initially used predominantly for herbal medicine, it evolved to being a significant object of commerce from 17th century England into the modern times. In 2020, the import volume of gin in the U.S. amounted to about 9.4 million proof gallons of gin while an export volume of around 1.2 million proof gallons was recorded for that same year. In 2020, approximately 10.2 million 9 liter cases in sales volume were generated in the United States.

Gin is one of the broadest categories of spirits, represented by products of various origins, styles, and flavor profiles. Seagram’s Gin is currently the leading brand of gin in the U.S. accounting for around 16 percent of the market’s volume sales share in 2020. Gin can be produced using several distillation methods broadly differentiated into several basic styles that include: pot distilled gin, column distilled gin, and compound gin. The consumption of gin in the U.S. amounted to approximately ten million 9 liter cases in 2019.

Gin is notably used in several popularly served cocktails. The most widely known gin cocktail is the Martini. Other notable gin-based drinks include: 20th Century, Fallen Angel, Gibson, Gin and Tonic, and many more. Advertising expenditure for gin in the U.S. amounted to around 2.17 million U.S. dollars. Gin continues drunk and celebrated the world over. In 2009, the second Saturday of June was officially designated as World Gin Day.

In the following 4 chapters, you will quickly find the 20 most important statistics relating to "Gin Industry". 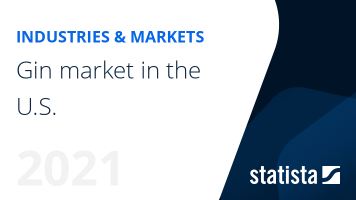 The most important key figures provide you with a compact summary of the topic of "Gin Industry" and take you straight to the corresponding statistics. 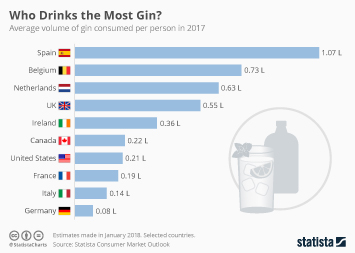 Who Drinks the Most Gin?