Published by Erin Duffin, Jul 4, 2022
The United States, as the name suggests, has been a federal state system since the inception of the nation. However, what has changed is the number of states contained in the country. When the United States was established in 1776, there were 13 states. There are now 50 states in the United States, with Congress most recently exercising their right to admit new states in 1959, when Hawaii and Alaska were admitted to the union. All these changes prompted a number of flag changes over the years, with the number of states in the union dictating the number of stars present in the iconic “Stars and Stripes” of the United States.
Given the geographic, historical, and cultural diversities of the various states, it is not surprising that analysis in the United States is often conducted on the state level. The District of Columbia is often included in such analyses as the 51st "state." The district does not hold statehood, as it was established as a political neutral without allegiance to any particular state. The inclusion of D.C. can certainly be justified in state by state comparisons, as it often falls at the more extreme ends of the scale. D.C. boasts the highest per capita real GDP, but at the same time has the highest violent crime rate in the country, both by considerable margins.

Such analysis is also desirable due to the responsibilities of government allocated at the state level. States are given liberty to tax their citizens, shape their health and education systems, and install statewide economic regulation. This allows for policy makers to target issues in the specific states in which they arise without being bound by national interests or federal politics. For example, income inequality is considerably higher in New York than it is in Hawaii. The ability of New York to increase state taxes and institute a higher minimum wage to help combat the issue of poverty without directly influencing the economies of other states is a prime example of the advantages of a state system.

The downside of such a state based system is that the states of the United States are not always so united on the federal level. A look at religiosity of each state suggests that state politics may result in difference democratic outcomes depending on the demographic composition of that state. When it comes to morally contentious issues such as abortion, consensus has then proven almost impossible to achieve despite many individual states holding a clear stance on the issue.

In the following 5 chapters, you will quickly find the 29 most important statistics relating to "U.S. States".

The most important key figures provide you with a compact summary of the topic of "U.S. States" and take you straight to the corresponding statistics. 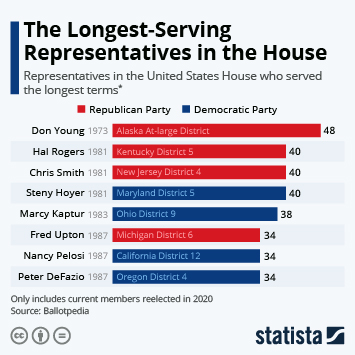 Who are the Longest Serving Representatives in the House 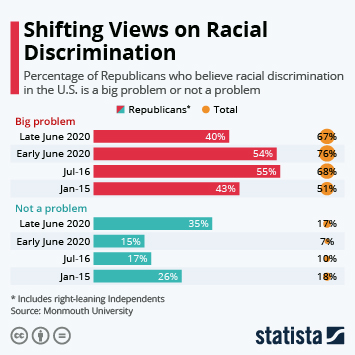