Published by
Dominique Petruzzi,
Sep 5, 2022
Since Avon’s founding in 1886, the company has grown into a worldwide cosmetics and beauty staple. The firm’s approach of contracting self-employed sales representatives created passionate advocates around the world and led to Avon now being established in over 70 countries. As a matter of fact, worldwide market penetration is essential for cosmetic giants, since more than half of the global market now lies outside of the traditional revenue sources of North America and Western Europe.

Riding the wave of entrepreneurship among the middle classes, Avon became a social phenomenon during the 20th century and, while it can no longer claim to be the powerful brand it once was, they remain a household name in the 21st century. In 2020, Avon was acquired by the Brazilian company Natura &Co, a leader in the cosmetics market, and turned into a privately held company. The direct selling business model is still nowadays a very popular one, especially in markets such as the United States and China, and Natura &Co recently ranked second among the leading direct selling companies worldwide, its most important brands being Natura &Co Latin America and The Body Shop. However, as far as Avon is concerned, the company has been experiencing significant financial problems in recent years, despite its prominent global image.

The decline of a beauty staple

Between 2011 and 2021, Avon’s total revenue dropped from around 9.23 billion U.S. dollars to around 3.4 billion. Unfortunately for Avon, the decline was not contained in one geographic region. The breakdown of revenue from 2013 to 2021 paints a bleak picture in which a downturn in any one region cannot be blamed for the global demise. Unsurprisingly, these drops saw Avon’s total operating profits decrease strongly by 2021. This sharp decline in financial returns has prompted a rethink in the firm’s strategies with the door-to-door approach coming under fire in the age of the internet, which has lately been changing from being solely a consumer information source to a retail platform. For this reason, many companies like Avon are now focusing on e-commerce channels, for example, by means of an online beauty store.

In the following 3 chapters, you will quickly find the 26 most important statistics relating to "Avon Products Inc.". 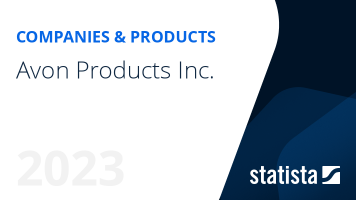 The most important key figures provide you with a compact summary of the topic of "Avon Products Inc." and take you straight to the corresponding statistics.

Beauty and personal care e-commerce in the United States

Gen Z and the beauty industry in the United States