Socially responsible, ethical investments (SRI) are those which combine investors' financial objectives with their concerns regarding environmental, social, and corporate governance (ESG) issues. Over time and in the context of international agreements, assets managed on the European SRI market nearly doubled in value, from 251 billion euros in 2010 to 476 billion euros in 2016. The number of SRI funds also grew to 2.4 thousand in 2016, with the majority domiciled in Luxembourg and France. The market also became significantly diversified in terms of strategies used whilst investing.
SRI investments frequently employ more than one strategy at a time. Looking at particular segments, the greatest increase in value was observed in the European exclusion-based SRI strategy, which grew exponentially from 184 billion euros in 2002 to 10 trillion euros invested that way in 2015. These strategies, also sometimes referred to as negative screening strategies, involve removing companies which engage in controversial activities (i.e. cluster munition production) from the investible portfolio.

Impact investments are high-net-worth-individuals' investments of private wealth into companies that follow ESG principles. Over time, this distinct category grew to amount to over 98 billion euros in Europe in 2015. The most popular impact investment areas, according to global impact asset managers operating in Europe in 2014, were financing of small and medium enterprises, followed by sustainable agriculture, clean tech, microfinance and affordable housing.

An interesting avenue for impact investments was provided by venture philanthropy and social investments organizations. In 2015, their investees on the European market included social enterprises and NGOs, and the main beneficiaries were economic and social development organizations, focusing specifically on children, youth and people living in poverty.

A survey on SRI awareness was carried out in France in 2015. Among financial product holders in France, 67 percent have never heard of responsible investing, and only eight percent knew precisely what this fund category was. Furthermore, 51 percent of French investors, who were very familiar with the topic of responsible investing, confirmed that an introduction of a public body recognition label for SRI funds would further motivate them to choose SRI investments. In 2016, the survey showed that 60 percent of the British population believed the financial sector could make high returns, while investing ethically and responsibly.

This text provides general information. Statista assumes no liability for the information given being complete or correct. Due to varying update cycles, statistics can display more up-to-date data than referenced in the text.
Published by Statista Research Department, Jun 7, 2022

share of global sustainable investment assets in Europe 2020, by strategy

Importance of ESG to firms and investors worldwide 2021, by country 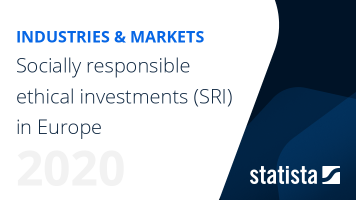 The most important key figures provide you with a compact summary of the topic of "Ethical investments - Europe" and take you straight to the corresponding statistics.