Published by
Bruna Alves,
Jul 5, 2021
Centrica, providing energy in the United Kingdom through its subsidiary British Gas, is one of the largest utility companies in the UK. In 2020, Centrica’s number of employees reached over 25,000, with the majority working for British Gas. Centrica’s revenues amounted to roughly 21 billion British pounds that same year.

How Centrica and British Gas were formed

Centrica originates from British Gas plc, which was formed because of the privatization of the British Gas Corporation in 1986. It was one of many privatizations brought about during the time Margaret Thatcher served as British Prime Minister. Further changes took place in 1997, with British Gas undergoing a demerger to form Centrica and BG plc. Centrica itself retained the British Gas brand, allowing it to provide gas and electricity to residential and business customers in the UK.
British Gas is one of the so-called ‘Big Six’ energy suppliers in the UK, the group of energy suppliers that enjoy the greatest share of the UK's energy market. During the fourth quarter of 2020, British Gas received 1,039 complaints per 100,000 customers. This was the lowest complaint rate among its large-scale competitors.

Market changes and profit decline in past few years

Like many of the larger suppliers, Centrica have endured declining profits in recent years. This is attributed to changing product mixes, the improved ease with which consumers can compare tariffs, and that the practice of switching energy suppliers has become more common in the country.

In the following 5 chapters, you will quickly find the 25 most important statistics relating to "Centrica and British Gas". 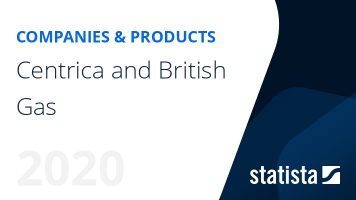 The most important key figures provide you with a compact summary of the topic of "Centrica and British Gas" and take you straight to the corresponding statistics.