Published by
Madhumitha Jaganmohan,
Jun 27, 2022
Carbon capture and storage or carbon capture and sequestration (CCS) is the process of capturing carbon dioxide (CO2) and storing it in a site, primarily in an underground geological formation, preventing the release of this stored carbon into the atmosphere. Injecting CO2 into the earth's surface has been used for several decades; however, CCS technologies that aim for long-term storage of CO2 are still relatively novel. A large share of the general public has not even heard of this technology. Since the introduction of the first commercially viable CCS projects in 2000, several large-scale CCS facilities opened and in operation around the world, as well as facilities in the advanced stages of planning.

In April 2017, the Petra Nova Plant was opened in Texas. This facility includes CCS during the coal burning process for electricity generation and uses the CO2 produced to improve the oil production system as part of a process that is known as enhanced oil recovery. The captured CO2 is sold to oil firms that compress the CO2 within old oil wells to dissolve and dislodge oil in the inefficient old oil wells. This process accounts for a minuscule portion of U.S. oil production, capturing carbon dioxide from natural gas and fertilizer plants as a byproduct.

Despite its advancements, CCS technology remains challenging to implement within large-scale facilities. The costs of operating these facilities are still relatively high, especially as it requires additional energy to capture carbon. Increased investments could stimulate the industry. However, the minimal amount of emissions that are contained may indicate that the technology is not a lucrative investment. Additionally, companies need an incentive to bury CO2, yet, many critics are against further subsidizing this technology. It is commonly argued that subsidies would encourage increased oil production without a guarantee that the stored CO2 would not leak (as has been observed in poorly monitored and poorly regulated facilities). Some supporters argue that CCS would benefit countries like India and China, where coal plants are still many years away from retirement.

In the following 4 chapters, you will quickly find the 22 most important statistics relating to "Carbon capture and storage". 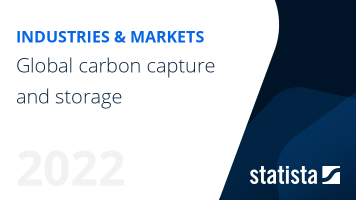 The most important key figures provide you with a compact summary of the topic of "Carbon capture and storage" and take you straight to the corresponding statistics.

Fossil fuel consumption in the U.S.

Coal energy in the U.S.