Spirits and liqueur market in the UK - Statistics & Facts

Published by Jan Conway, Dec 22, 2021
A spirit or hard liquor is an alcoholic beverage that is produced by distilling already fermented plant products such as grains. The total UK spirits industry generated 9.3 billion British pounds worth of revenue in the UK in 2019. Quarterly revenues generated with spirits show highs during the last quarter of the year, which coincides with Christmas and regular, although less pronounced, dips during the first quarter.

Liqueurs reach a much wider audience than spirits. The brand most popular among UK consumers was Jägermeister. The most popular spirit was Jose Cuervo Tequila, which reached less than a third of the consumers that Jägermeister reached. Tequila is made from the blue agave plant. Considering at home and out of home consumption, on average, a person buys 64 milliliters of spirits per week in the UK.

In the following 5 chapters, you will quickly find the 28 most important statistics relating to "Spirits and liqueur market in the UK". 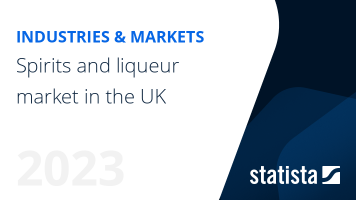 The most important key figures provide you with a compact summary of the topic of "Spirits and liqueur market in the UK" and take you straight to the corresponding statistics.