With an estimated population of approximately 28 million people, Venezuela is among the most populated countries in South America. It is bordered by other populous countries, like Brazil and Colombia, and its capital Caracas, a popular metropolis, is home to roughly two million inhabitants.

As a result of the implemented populist policies, a major economic crisis has been rocking Venezuela for years and has resulted in hyperinflation, food and water shortages, increased unemployment, and increased violence rates. Consequently, Venezuela scores first on the misery index for the most miserable countries in the world. In 2020, Caracas was also one of the most dangerous cities in the world - only surpassed by Los Cabos, Mexico. Additionally, Venezuela ranked third among the 20 countries with most murders per 100.000 inhabitants.

Venezuela's plight does not stop there - the Bolivarian Republic of Venezuela is among the most corrupt countries in the world, a view shared by the vast majority in the country: In a survey conducted in 2020, 72 percent respondents stated that the president and all or most of his staff were involved in corruption. President Nicolás Maduro, who has been in power since 2014, is challenged by the federal deputy to the National Assembly, Juan Guaidó, who at the beginning of 2019 took an oath to serve as interim President after Maduro's claim to the seat had been contested. Nevertheless, the opposition has weakened ever since, as showed by the poor results obtained in the 2021 regional elections, the first elections in years in which most of the opposition parties participated, after they boycotted the presidential elections in 2018 and the congressional polls in 2020.

As a consequence of the political instability of the state, the economy suffers as well, as mentioned above: Gross domestic product has been plummeting since 2015. The economic recession led to an incredible inflation rate of more than 2,000 percent in 2020. Million of people are leaving the country in search for better economic conditions and stability, resulting in the Venezuelan refugee crisis.

The oil and gas industries are the most profitable industries of the country. Venezuela has the largest crude oil reserves worldwide, but the country's oil production has plummeted in recent years, falling from 2.84 to 0.54 million barrels per day between 2010 and 2020. China is displacing the United States as the most important export and import partners of Venezuela, as the relationship with the latter is straining under the current climate. Except for 2020, Venezuela has been able to maintain a trade surplus. thanks to its oil exports.
This text provides general information. Statista assumes no liability for the information given being complete or correct. Due to varying update cycles, statistics can display more up-to-date data than referenced in the text.

Venezuela and the coronavirus 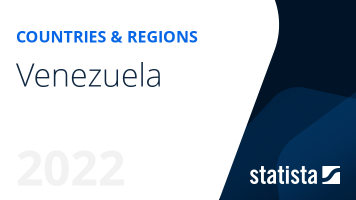 The most important key figures provide you with a compact summary of the topic of "Venezuela" and take you straight to the corresponding statistics.