Published by N. Sönnichsen, Apr 13, 2022
Energy production can be divided into two categories; primary energy - the extraction of fossil fuels and uranium, as well as harvesting of renewables such as biomass fuels, wind, and solar energy; and secondary energy - electricity generation using primary energy sources. Fossil fuel sources are the main contributor to the United States’ energy production. Petroleum, natural gas, and coal have largely dominated the industry since they were first commercially extracted in the 19th century.

In the last few decades, U.S. energy production has increased in almost every field, except for coal. Anthracite production in the U.S. has fallen significantly from a mid-20th century high of nearly 45 million short tons. Natural gas has since succeeded coal as the main fuel used for electricity generation. Over the next few decades, energy production is forecast to increase to over 118 quadrillion British thermal units. Greater strides in energy conservation and energy efficiency developments will likely contribute to a fall in fossil fuel dependency in the future.

In the following 6 chapters, you will quickly find the 23 most important statistics relating to "Energy production in the U.S.". 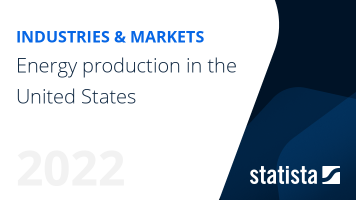 Go to report Energy production in the U.S.
Top Seller

The most important key figures provide you with a compact summary of the topic of "Energy production in the U.S." and take you straight to the corresponding statistics. 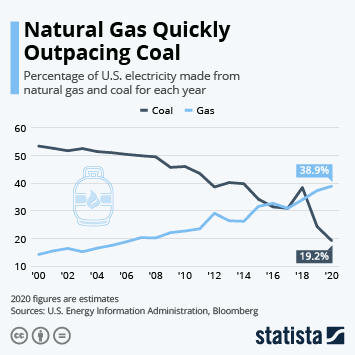