Published by
Christina Gough,
Jun 15, 2021
The Las Vegas Raiders are a professional football team that competes in the National Football League (NFL) in the league's National Football Conference (NFC) West division. Founded in January 1960, the Raiders have appeared in five Super Bowl games, winning three of them in 1976, 1980, and 1983, and losing twice in 1967 and 2002.
Up until the 2020 season, the Raiders played their home games at the Oakland-Alameda County Coliseum, a mulit-purpose stadium in Oakland, California that is also home to the Oakland Athletics of Major League Baseball (MLB). In 2019, the team’s average regular season home attendance amounted to 52,549. The average ticket price for a Raiders home game that year was 87.78 U.S. dollars. The Raiders, who had earlier relocated to Los Angeles in 1982 and returned back to Oakland in 1995, relocated to Las Vegas, Nevada in 2020.

The Raiders are principally owned by Mark Davis and the franchise has an estimated value of around 3.1 billion U.S. dollars as of 2020. The team generated 383 million U.S. dollars in revenue in 2019, the lowest of any NFL team in that year. The team’s operating income was also the lowest in the NFL in 2018. Popularly referred to by supporters as the Silver and Black, the Raiders’ Twitter and Facebook pages had a combined total of five million followers as of February of 2020.

In the following 4 chapters, you will quickly find the 23 most important statistics relating to "Las Vegas Raiders". 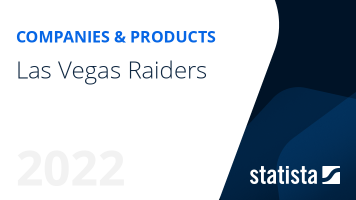 The most important key figures provide you with a compact summary of the topic of "Las Vegas Raiders" and take you straight to the corresponding statistics.