The Pittsburgh Steelers are a professional football team based in Pittsburgh, Pennsylvania that competes in the National Football League (NFL) in the league's American Football Conference (AFC) North division. Founded in 1933 by Art Rooney, the Steelers are the oldest franchise in the AFC and were initially called the Pittsburgh Pirates, before adopting their current name in 1940. As of 2020, the Steelers' franchise value was estimated at three billion U.S. dollars.
Since its inception, ownership of the Steelers has stayed within the Rooney family. Art's son, Dan Rooney, was the owner of the team from 1988 until his death in 2017. Dan's son, Art Rooney II, is the current majority owner. The Steelers play their home games at Heinz Field located in the North Shore neighborhood of Pittsburgh. In 2019, their average regular season home attendance stood at 62,237 per game and the average ticket price for a Steelers’ game in that year was 104.60 U.S. dollars. In 2019, the team generated revenue of around 457 million U.S. dollars and its operating income for that year was 86 million U.S. dollars.

The Steelers have become one of the most successful NFL franchises in the post-merger era, winning more Super Bowl titles and playing in more conference championship games than almost any other NFL team. The Steelers are winners of six Super Bowls, a league record that they share with the New England Patriots, and eight AFC championships. The Steelers share the record for the second highest amount of Super Bowl appearances alongside the Dallas Cowboys and the Denver Broncos with eight appearances each. Only the New England Patriots have been to the Super Bowl more times with a total of 11 appearances.

The Steelers have a large following both locally and further afield and their fanbase is commonly referred to as “Steeler Nation”. Their presence is also felt on social media, where they have close to ten million combined followers on Facebook and Twitter.
This text provides general information. Statista assumes no liability for the information given being complete or correct. Due to varying update cycles, statistics can display more up-to-date data than referenced in the text.

Christina Gough
Research expert covering sports and video gaming
Get in touch with us now
Published by Christina Gough, Jun 20, 2021 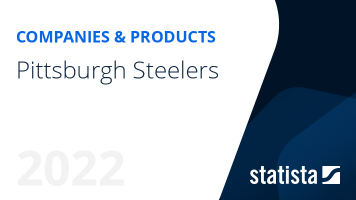 The most important key figures provide you with a compact summary of the topic of "Pittsburgh Steelers" and take you straight to the corresponding statistics.