The Tennessee Titans are a professional football team that compete in the National Football League (NFL) as a member of the American Football Conference’s (AFC) South division. Founded in Houston, Texas by Bud Adams in 1960, the Titans were formerly known as the Houston Oilers. The team relocated to Memphis, Tennessee in 1997 and then moved to Nashville a year later, where it adopted its current name in 1999.
The Titans play their home games at the Nissan Stadium in Nashville. In 2019, the team’s average regular season home attendance stood at 64,509. The Titans' revenue in 2019 was approximately 422 million U.S. dollars and their operating income for that year amounted to around 57 million U.S. dollars. The Titans are currently owned by Amy Adams Strunk, daughter of the initial founders and, as of 2020, the team’s franchise value stood at approximately 2.3 billion U.S. dollars.

The Tennessee Titans have made it to the Super Bowl game once, which they lost to the then St. Louis Rams in 2000. The Titans made the playoffs in 2019, but lost the AFC Championship Game to the eventual Super Bowl winners, the Kansas City Chiefs. The Titans have a combined total of about 1.78 million Facebook and Twitter fans and followers.
This text provides general information. Statista assumes no liability for the information given being complete or correct. Due to varying update cycles, statistics can display more up-to-date data than referenced in the text. 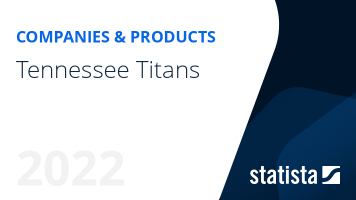 The most important key figures provide you with a compact summary of the topic of "Tennessee Titans" and take you straight to the corresponding statistics.