Published by
Christina Gough,
Jun 28, 2021
The Memphis Grizzlies are a professional basketball team that compete in the National Basketball Association’s Western Conference Southwest Division. The team was founded in Vancouver, Canada in 1995 along with the Toronto Raptors. Then known as the Vancouver Grizzlies, the team was sold off and moved to Memphis, Tennessee in 2000.
The Grizzlies currently play their home games at the FedExForum arena in downtown Memphis. During the 2019/20 NBA season, the average regular season home attendance for a Grizzlies game was 15,857 and total attendance for that season amounted to 523,297. The team generated around 224 million U.S. dollars in revenue during the 2018/19 season and their operating income for that same season stood at around 24 million U.S. dollars. The franchise value for the Memphis Grizzlies stands at an estimated 1.3 billion U.S. dollars and the team is currently owned by Robert Pera, the founder of Ubiquiti Networks, Inc..

The Grizzlies have made regular appearances in the playoffs in recent years, but are yet to secure a championship title. The franchise has a combined total of approximately 2.89 million fans and followers on Facebook and Twitter.

In the following 4 chapters, you will quickly find the 33 most important statistics relating to "Memphis Grizzlies ". 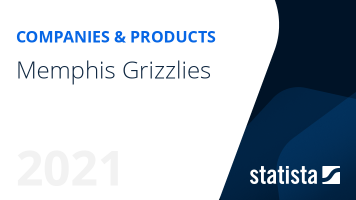 The most important key figures provide you with a compact summary of the topic of "Memphis Grizzlies " and take you straight to the corresponding statistics.