Published by
Christina Gough,
Jul 1, 2021
The Milwaukee Bucks are a professional basketball team which compete in the National Basketball Association’s Eastern Conference Central Division. The team was founded as an expansion team in 1968.
The Milwaukee Bucks currently play their home games at the indoor Bradley Center in downtown Milwaukee. During the 2019/20 NBA season, the average regular season home attendance for a Bucks game was 17,710 and total attendance for that season amounted to 549,036. The Bucks generated around 239 million U.S. dollars in revenue during the 2019/20 season and the team’s operating income for that season amounted to around 27 million U.S. dollars. The franchise value of the Milwaukee Bucks stood at around 1.63 billion U.S. dollars during latest estimates in 2020. The team is owned by a group led by billionaire hedge fund managers, Weslie Edens and Marc Lasry, who bought the team from former U.S. Senator Herb Kohl in 2014 at a purchase price of 550 million U.S. dollars.

The Bucks won their only NBA championship title to date three years after the franchise's inception in 1971 under the leadership of hall of famer Kareem Abdul-Jabbar. As of 2020, the Bucks had over three million fans and followers on Facebook and Twitter.

In the following 4 chapters, you will quickly find the 34 most important statistics relating to "Milwaukee Bucks ". 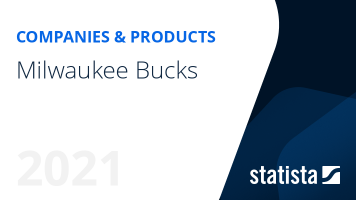 The most important key figures provide you with a compact summary of the topic of "Milwaukee Bucks " and take you straight to the corresponding statistics.