The Orlando Magic is a professional basketball team that competes in the National Basketball Association’s Eastern Conference Southeast division. The franchise was established as an expansion team in 1989, and has since grown to become one of the most successful of the expansion teams of that era, appearing in two NBA finals in 1995 and 2009.
The Orlando Magic plays its home games at the Amway Arena in Downtown Orlando, Florida. During the 2019/20 NBA season, the average regular season home attendance for a Magic game was 17,092 and total attendance for that season amounted to 529,870. The Orlando Magic generated around 218 million U.S. dollars in revenue during the 2019/20 season and, in the same season, the team’s operating income stood at around 37 million U.S. dollars. The Magic’s franchise value currently stands at an estimated 1.46 billion U.S. dollars and the team is owned by Richard Devos, and American businessman and co-founder of multi-level marketing health company, Amway.

Some of the most famous players to have pulled on the Magic shirt include 2004 first round pick, Dwight Howard, and NBA Hall of Famer Shaquille O'Neal, who led the Magic to their first finals appearances in 1995. The Orlando Magic’s Facebook and Twitter pages have a combined total of approximately 4.23 million fans and followers.
This text provides general information. Statista assumes no liability for the information given being complete or correct. Due to varying update cycles, statistics can display more up-to-date data than referenced in the text. 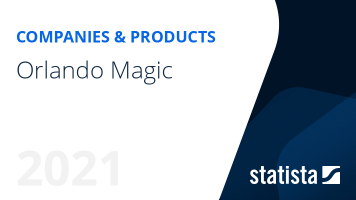 The most important key figures provide you with a compact summary of the topic of "Orlando Magic " and take you straight to the corresponding statistics.