More than three million people attend games of the Los Angeles Dodgers each season at Dodger Stadium which has been the home for the team since 1958. The average regular season attendance was at 49,065 in 2019. The average ticket price for games of the Los Angeles Dodgers has increased over the past few years, amounting to over 42 U.S. dollars for the 2019 season. The Dodgers are also very popular on social media as the team’s accounts on Twitter and Facebook are amongst the most followed and liked of all MLB teams.

In the following 4 chapters, you will quickly find the 40 most important statistics relating to "Los Angeles Dodgers". 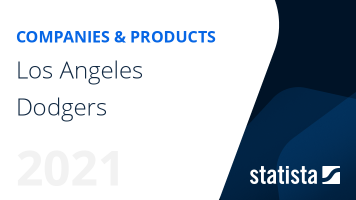 The most important key figures provide you with a compact summary of the topic of "Los Angeles Dodgers" and take you straight to the corresponding statistics.