Global electricity demand is set to more than double by mid-century, relative to 2020 levels. With renewable sources – in particular wind and solar – expected to account for the largest share of power output in the coming decades, energy storage will play an important role in maintaining the balance between supply and demand. Investments in energy storage worldwide reached three billion U.S. dollars in 2020, and the market is forecast to continue growing. Pumped hydro, hydrogen, batteries, and thermal storage are a few of the technologies currently in the spotlight.

How does energy storage work?

Electricity demand oscillates throughout the year and across the day, usually peaking in the winter months and at nighttime. In contrast, solar electricity generation, for example, is at its highest during the daytime, when demand is frequently low. Energy storage can provide more flexibility to the electricity grid, guaranteeing a more efficient use of resources. When supply is greater than demand, excess electricity can be fed into storage devices. It can in turn be tapped hours (or sometimes even days) later, when demand is greater than supply. Although progress has been slow in recent years, energy storage deployment worldwide is expected to pick-up in the coming decade. In 2020, around 29 gigawatt hours had been deployed worldwide. By 2030, the cumulative capacity is forecast to surpass 700 gigawatt hours.

There is a wide range of energy storage technologies available, but they can usually be divided into five major categories, depending on their working principle: mechanical, electrochemical, compressed air, thermal, and chemical. Mechanical technologies, in particular pumped hydropower, have historically been the most widely used large-scale energy storage. In 2021, global pumped storage hydropower capacity surpassed 130 gigawatts, with China, Japan, and the U.S. combined accounting for half of this value.

Batteries (electrochemical) and hydrogen (compressed air) storage made up less than two percent of global electricity system flexibility capacity in 2021. However, continuously-declining prices should cause these technologies to gain considerable market share in the next 30 years. For example, the installed power generation capacity from battery storage worldwide is forecast to reach roughly 780 gigawatts in 2050, an increase of more than 250-fold in comparison to the less than five gigawatts installed in 2020. Similarly, thermal energy storage capacity across the globe is expected to triple in one decade, to reach 800 gigawatt hours in 2030.
This text provides general information. Statista assumes no liability for the information given being complete or correct. Due to varying update cycles, statistics can display more up-to-date data than referenced in the text.

Bruna Alves
Research expert covering energy and environment
Get in touch with us now
Published by Bruna Alves, May 11, 2022 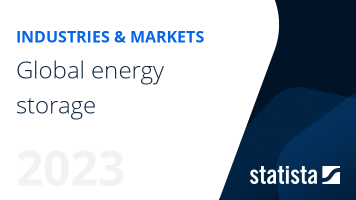 The most important key figures provide you with a compact summary of the topic of "Energy storage" and take you straight to the corresponding statistics.